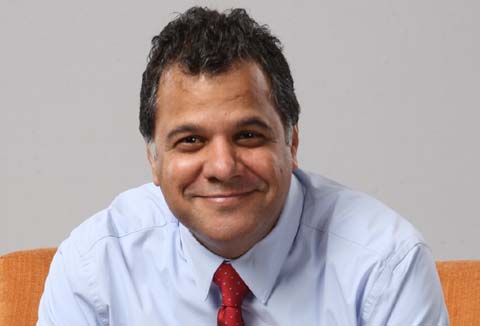 One of the leading Television channels Colors is climbing the ladder of success and is giving a tough competition to other channels with its fiction and non-fiction shows such as Balika Vadhu, Madhubala - Ek Ishq Ek Junoon, Comedy Nights with Kapil, Bigg Boss Saath 7, India's Got Talent Season 5, and many more.

With the recent launch of two new fiction shows Beintehaa and Rangrasiya, which are grabbing the eyeballs of the viewers, the channel is all set to launch a thrilling stunt based show Khatron Ke Khiladi. This show which has earlier been popular in all the four seasons is coming back after a gap of two years on screen with an entirely new concept.

As the channel is riding high with the numbers on TRP charts, we got in touch with the CEO of Colors channel Raj Nayak who shared his thoughts and ideas about the channel.

What is the surprise element of Colors channel?

We are very open minded and if you see the channel you will realize that we go from this extreme to that extreme. We do all kind of shows and that's the surprise that channel prefers to live with. So if you see our channel we have no baseline because we have tried all genres in our shows. You will also see lots of different things that we will be doing this year.

Is there any plan to introduce a new show?

We are coming up with a new show on Colors and we have already spoken about it with the media but we will speak about the show in detail when things related to it get materialized. But our focus will be on the fiction shows because fiction category is the stable diet. Our newly launched fiction shows Rangrasiya and Beintehaa are doing well, and so we have thought of two to three other fiction shows as well which we are planning to launch one after the other.

How has the response been to the show 24 tele-series?

24 tele-series from our perspective was a big success for us. It is because for the first time somebody tried making a show in this unique format. Even if you see the US version, first season of the original 24 show in the US also did not do well.

But from our perspective the show 24 tele-series did very well because the show managed to grab its English speaking audience to a Hindi GEC (General Entertainment Channel) and the buzz it created in terms of brand indeed helped a lot for the channel Colors. It was publicized well and more importantly we are very happy with it and are committed to launch the season 2 of the show. So talks are going on with Anil Kapoor and I believe that season 2 will be bigger than season 1. Actually there were quite a few new techniques used such as four split screens which was difficult for the Indian audience to digest but I believe they will soon get used to it so we are going to telecast it from Monday to Friday on the channel Rishtey sometime in April or May because people are still calling and sending us mails to upload the series episodes on the YouTube as it is not available anywhere. So we will telecast it again on Rishtey instead of Colors as we don't have a time slot available on our channel.

Khatron Ke Khiladi Darr ka Blockbuster  is already known by the Indian audience and it's just like we are making a noise that we are back. It's like Golmaal 1, Golmaal 2, Golmaal 3, and we are coming back after 2 years.

The cost of making each show is different. Fear Factor's cost will be less as compared to the cost of Bigg Boss but its cost would be similar to the cost of 24 tele-series or India's Got Talent or even Jhalak Dikhla Jaa. Probably the production cost will be higher as the entire show will be shot for 30 days at Cape Town.

Your weekday's fictional programming has stretched to weekends, what is the thought behind it?

We were the first to do it last year and we did it for eight months. So in 2013, Colors TV shows were available for 6 days in a week. We took a break and brought it back to fill the gap in the weekends so unless we have a show with which we are convinced, we extend it and it worked beautifully for our channel last year because there were more viewers to watch fiction shows apart from some reality shows on a weekend and surprisingly we observed that on Saturdays the viewership is high as compared to week days. And now even Star Plus is following our strategy which makes us feel good because that's a mark of a being a good leader. So from now onwards shows airing from 7 pm to 9pm will be telecast six days a week.

How do you see Big Boss Saath 7?

I think this season of Bigg Boss was one of the best seasons.  We got highest numbers for the reality show in terms of TRPs this year. So I think it was very good when a season does well. It has become easier for us to sell the Bigg Boss rights next year as it is convenient for us to do the marketing of the show. You won't believe people call us and ask us that why can't we have Bigg Boss twice in a year as these top stars have a huge fan following and also some of the top stars call us to air the show twice in a year.

What are the challenges that the channel has to face to live up to their viewer's expectations?

We are our own competitors. If you see last year's Jhalak Dikhla Jaa we tried to be innovative and this year we made the show bigger and better however, the format doesn't change but had to bring in something new which was the biggest challenge for us. So we reinvented the show and Manish Paul and Kapil Sharma's comedy acts made the season more humorous and this was one of the reasons we took a break for Khatron Ke Khiladi. We waited for the right time and decided that we will come up with something new to make it more interesting for the viewers and we exercised ourselves and then came up with fresh ideas.

7 years ago Rangrasiya is is the only best show on colors, it's a class apart , no one can compete Sanaya Irani & Ashish Sharma, the only previous impressive show on Indian tellyworld is Iss Piyaar ko Kia naam doon ( the original one)

7 years ago Rang Rasiya..rocks...i have nevr witness a movie in small screen but thanks to rr...we are watching..love parud...Sanaya Irani you rocks...

7 years ago Rang Rasiya is a great show. Ashish Sharma and Sanaya Irani are doing great justice to their roles. I really hope TRPs will deservedly reflect the work of Team RR is putting into the show.

7 years ago Rangrasiya is a great show!!!! The lead actors Sanaya Irani and Ashish Sharma are the best!!!!!

7 years ago rang rasiya is rocking..just love the show,,