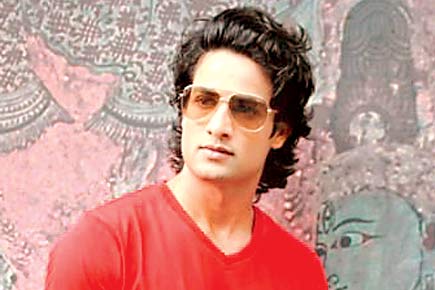 Television actor Himanshu Soni is seen in the new show Neeli Chhatri Wale on Zee TV as God Shivaye. While he will be seen playing a God, he has been portraying the character of the majesty king Buddha simultaneously in Buddha on the same channel. Though he has won accolades for his immaculate acting in the show Buddha, it is sure that he will be praised for his acting skills in this show too.

Himanshu talks about his character in depth with us.

Here is he sharing about the same -

Through this show the aim is to make people believe that though God exists, it is up to the person the various paths laid by him, "After doing Buddha my connection didn't happen with God instead I got connected to the audience's. I got to know that every person has goodness in them, so we must treat every person equally. Thus we are bringing this concept in our show that there is no God or there is no mythological story. There is only a common man and that is me who is to tell him what is wrong and what is right. I am here to show you various paths, it is up to you which path you want to choose. So I am really enjoying to play this role after Buddha, as this role will show people their reality that what is life. We will show that mental peace is very important because in today's time every person is disturbed with some or the other things," says Himanshu.

We further asked him whether does he believe in God or not and what is his idea about God to which Himanshu replied, "What is God? It is a positive energy. When we go to temples we feel divine  and if we see god in every person then this world will become a better place to live as our society and caste will become one and I am also trying to do the same through my character."

As he is seen playing the role of majestic king Buddha and now seen playing a similar kind of role, we ask Himanshu which roles is he looking forward to play in the future? This is what he answered, "I want to do a role which is untouched by our sanskriti, despite being in India people are unaware about many things like what is God and to show that we have brought this show Neeli Chatri Wale where we will show that your inner soul is God."

He further adds, "Similarly in Buddha we showed that life and death is in our hand, jeevan ka satya hum hai koi aur nai. If I am sick, no idol will come and give me a glass water. Mujhe Karm karna hoga jiska phal mujhe milega which means I will have to go and drink water only then I only I will survive. So I want to do roles in which I can show the untouched facets of life, I want to do film which will make people aware about various things or roles like Bhaag Milkha Bhaag or an upcoming film Mary Com."

How is his equation with Yashpal Sharma he said, "When I heard that Yashpal Sharma is with me, I was very happy as I have got to learn many things from him and I discuss many scenes with him. So yes I am glad to to work with such a great actor."

TellyBuzz wishes Himanshu Soni all the best for the show!

sanufdutta 9 years ago Shahrukh Khan's one of the most deadliest actor in bollywood.He just rocks each n every single thing.