View Profile
He is only thirteen, but is known to all as the elegant and tough to-be king of an empire.

Rushiraj Pawar, popularly known as Chandragupta Maurya, is the latest addition to list of child actors in the television industry.

This boy who is now in Imagine's new mythic show opens up his heart in a candid chat with Telly Buzz... 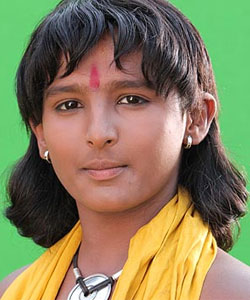 How do you feel portraying a historic figure like Chandragupta Maurya?
I am really happy that I am portraying a high level role and I know I have to cope up with it. I was really nervous in the beginning as I had no idea whether I will be able to portray such a prominent character.  I consider myself lucky to get the role because there are a lot of strugglers in the industry who are really talented than me trying to make a mark.

What were the preparations you did for the character?
Actually I had to learn the way Maurya talk and the body language he carries. Also, there are a lot of Sanskrit words used in the speech; I had to work a little on that. Frankly speaking, that helped me in my studies as well.

You are playing the central character, were you nervous taking the whole responsibility of the show?
Actually the role is very challenging and I never thought that I could make it. I was indeed very nervous because I am working under a big banner which has made shows like Dharam Veer, Pritviraj Chauhan etc, that too in the lead role. Also I am doing a show for a  channel like Imagine. In all manner I am trying to give my hundred percent to the work.

How much are you involved in the stunts of Maurya? Did you do all by yourself or have you taken body double?
Though I perform all the sword fights all by myself, I used to have a body double for the stunts which require high jumps off the cliff and such.

Did you do a background study of the character?
Not really. But for the auditions, I was told about how Chandragupta Maurya was and how he was as a student. I was also narrated the character Chanakya and how powerful a person he was.

What was the most difficult scene that you performed?
There was a scene where I have been chased by dogs. The scene was really difficult because the dogs were as huge as me and I had to run from them.

The show has been doing well in spite of being in the cricket season, how do you feel?
I would like to thank everyone for making the show a successful one. But also I would like to say that there is more to present and show to the people. We will put more of our efforts to make you entertain more.

Who is your best friend on the sets?
All are my good friends and I am really close to Chanakya (Manish Wadhwa) also.

Can you tell us something about yourself and your parents?
I am from Mumbai and I am thirteen years old. My dad is a professional photographer and mom is a house wife.

Were your parents reluctant of you getting into acting?
Not at all. In fact, they were really supportive and they are looking after me during my shoot. I am really obliged to them and I consider myself lucky because there are a lot of people who have talent but their parents do not allow.

Did you always wanted to become an actor?
Yeah

Were you into acting before you got Chandragupta Maurya?
I used to participate in school skits and plays and I received first place for Mono Act in Mumbai.

What are your other interests?
I like playing Basket Ball, Cricket etc.

Kids, when gain popularity, have the tendency to fly high, what is your policy to stay grounded?
I am very simple and do not throw attitude at all. You can ask the production people. And I know that the character Chanakya is more important than me in the show

What do you aspire to become?
I always wanted to become an actor. At the same time I have no aspirations to become a superstar, but a good actor.

How do you manage work with studies?
I used to manage it well with time and the school authorities support me a lot in this. Now I have a vacation and hence it is not an issue at present.

High-voltage drama to ensue in Meher and Sarabjit’s life in Choti ...

peihu 9 years ago you are a rockstar!!!!you are definetely blessed...

RagSia 9 years ago I was on edge during fight yesterday!
ur acting z really upto d mark!
really cute choice by makers 4 lead!

babli102030 9 years ago oh little boy but a BIG ...BIg actor sat and sun.'s episode were awesome and ur acting was superb ...god bless u great kid

lilly 9 years ago Great job Rushi you have enacted CGM with such ease , I am sure you all will take ths show to an even great height, you are so adorable as CGM

LadyMacbeth 9 years ago THIS IS SUCH a GREAT SHOW , WITH RUSHIRAJ BEING THE MAGIC OF CGM . Such young age , yet such mind blowing acting . No praise is enough for him . The level of subtlety , the level of passion that Rushiraj puts in his acting is simply mind blowing . Rushiraj is surely the next Rajat Tokas , a great star in making , his acting is powerful, smooth , flowing like water of a rivulet , he's a natural , born actor , He can do magic with his eyes , his acting is effortless , n so controlled , whether in language delivery , body language or expression , just the right amount of expression . I've always lovvved history , it's my favorite subject n I'm super impressed with the execution n treatment of this show . All actors n executive teams r doing a fab job . Kudos 2 ,em . But , me n my sis fell head over heels in love with Rushiraj when we 1st saw him in the promo of CGM . He's enchantment defined, so watching it mainly for him. * Blush blush , then goes back in faint mode thinking about Rushiraj.

tulipbaby53 9 years ago This show is so good. I've just started watching it.

This boy is so mature and level-headed! I hope he stays this way. God bless him!

"Sushant Singh Rajput died by Strangulation and Not ...
19 minutes ago

Roadies Revolution: Double eviction and many more surprises ...
25 minutes ago