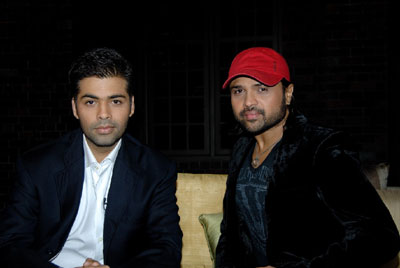 “Hats Off to this man with the Cap”. From directing and producing serials, he moved on to become a Music Director turned singer and now you can also see him on the big screen as an actor. This is the super inspiring success story of Himesh Reshammiya. As always said - “You love him or hate him, you just cannot ignore him”. His nasal twang and aspiring acting career went on to become a butt of many jokes but that just added fire for him to emerge as a successful actor and his film got an unprecedented response and fantastic opening.

This week, Karan drinks his coffee with this man with the cap. As he talks his heart out, you will get to see another side of Himesh – all those who called him arrogant will watch him to be a Honest, Humble and down to earth person. He clears the air that there is no rift between him and Salman Khan and owes his success to Salman Bhai. This Music Director turned singer also admits that Sonu Nigam is the best singer of India. He also does not hesitate to talk to Karan regarding the critic comments on him and says he is aware that there are large sections of people in the industry who make fun of his singing and want to watch the movie just to laugh at him. But he also continues that he is all set to give his best try to win over them!! For the first time, you will see Himesh talking about the secret behind his Cap – Without any qualms he says - “Cap kya pehna kyunki baal kam ho rahe the.” And like all the guests of this show, the Koffee Hamper is what Himesh is looking forward to!!

What is the biggest flaw as a singer according to Himesh? What is his message to all those who laughed at him initially? If Himesh woke up one morning and realized he has turned into Sonu Nigam he would… Which mainstream actor would be an ideal choice to play his older brother in the film? Rani or Kajol – Who is the better actress according to Himesh? Tune in to watch this exciting episode!

Karan: Welcome to Koffee with Karan Himesh… how does it feel to be on the show?

Karan: Firstly, congratulations on the super success of your film… I know a large section of the industry was surprised… but were you expecting this kind of success?

Himesh: I think… I just believed in God, destiny and somewhere I think everyone just prayed for me and that is something that worked for me

Karan: By everyone, you mean who, large sections of the industry were not praying for you…

Himesh: No, no… only that 1 %… people just felt that this can not happen, a singer not a very good looking guy…

Karan: As in, not conventional looking… not hero material?

Himesh: I think you are being nice to me… but, it was something that was unprecedented… when the film started, people did say, “paagal ho gaya hai”. I understand. But, when actually the film was declared a hit… then, people realized.

Karan: There were particular people, who were somehow targeting you… is there any one kind of person that you felt resentment towards?

Himesh: No… I really did not feel resentment towards anyone… because when you try something which is unprecedented… then people are going to… till you prove it… and when this film was releasing… and it was declared a hit… so many people called me and said, “very good”… congratulated me… and they said, that they felt it wouldn’t work… so, its just that I was doing something new… something different… and it takes a little time to accept something that is unconventional…

Karan: Have you heard that behind your back there might be other singers who might be making fun of you?

Karan: But one thing is… you keep very quite about your wife… you don’t talk about her?

Himesh: Because she is a very simple girl…

Karan: It’s not that you feel that your image gets affected

Himesh: No, the first time that I was asked whether I was married… I said Yes.

Karan: And you have a son?

Himesh: His name is Swayam.


To know all this tune into Koffee with karan, this Sunday, June 29th exclusively on Star world and Star One at 9 PM.

I'm really happy for him. May he continues to be successful in life.. :)

15 years ago Itni jaldi shaadi karlee???
I am very happy for him.

And I have just realized , mera dil kitna bhada hai...

+ 5
15 years ago thanks for posting. he is lucky after what I heard y'day on the news that some one had planned to kill him on saregama stage.

+ 8
15 years ago awww HR is neevr talked abt his wife and son and he finally did!Grea article

+ 3
15 years ago omg hes mariied, i never new he was married, AND he has a son, im shocked

+ 3
15 years ago Married and a kid.. OMG... And this guy talks only about his father ans sometime mother.. Wife and son have no place in his success. Isn't it little wierd.

15 years ago oh wow....im so happy for himesh...such a nice guy...i totally believe that we shud believe in god and have faith..if its meant to be things will happen...pray for yourself as well as others( i think tahts the secret to a succesful life)

15 years ago omg!! I never knew he was married and had a kid!! how has he been hiding them for so long!?