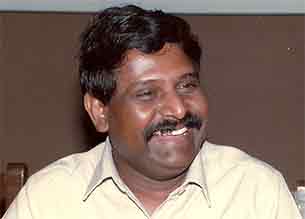 Director Guru Ramesh says the biggest challenge in the making of Tamil thriller "Enna Satham Intha Neram", which releases Friday, was to keep the public away from seven-year-old quadruplets who feature in the movie.

"The biggest challenge was to keep public away from the quadruplets. Everybody wanted to click pictures with them and it was not easy to control them. Since we shot most the film in Hyderabad zoo, we were mostly surrounded by people and so it became even more difficult," Guru Ramesh told IANS.

"People didn't even bother us while we were shooting in the zoo. They were well-behaved and only saw us from a distance. But the moment they saw the quadruplets, they would come running for pictures," he added.

Right from the scripting phase, Guru had quadruplets in his mind but he knew finding them would be difficult.

"We've had family dramas with one, two and even three kids. So, when I started writing, I had the idea of featuring quadruplets in my story. When I narrated the idea to my producer, he was kicked, but he wondered how will I find four identical kids," he said.

"I knew it would be extremely difficult to find them. I thought about using two twins of the same age group as quadruplets because not always these twins are identical. Meanwhile, I was also searching for identically looking quadruplets through friends and I was lucky enough to find them in Chennai," he added.

Drew Barrymore Reunites With Ex-Husband After Not Speaking For 15 ...