Mumbai, Nov 27 (IANS) In this extended era of sequels and remakes, it's no surprise that 'Pyar Ke Side Effects' - a sexy romantic comedy with a deliciously open ending - is ready to find its next level.

Pritish Nandy Communications (PNC) is all set to continue the next chapter of the movie showing Rahul Bose and Mallika Sherawat's on-screen urban romance, which became one of the highest grossers ever for PNC. 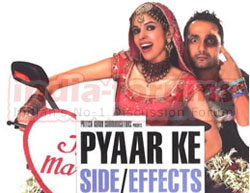 There's only one hitch. Apparently, Rahul Bose has expressed no interest in doing a sequel of the movie. Ditto for Mallika Sherawat, who too has vanished after reaping the benefits of her first fully clothed film since 'Khwahish' and 'Murder'.

'Yes, a sequel to 'Pyar Ke Side Effects' is definitely in the pipeline. And if Rahul or anyone else from the original cast and crew doesn't want to do the sequel, then no problem. We'll replace whoever isn't interested,' said Pritish Nandy of PNC.

'I want Rahul and Mallika to encore their roles. But if they don't, then I can easily do it without them. I've repeatedly said actors and directors don't make a difference. What matters is the script and producer. The directors of both 'Jhankar Beats' and 'Pyar Ke Side Effects' were greenhorns when they came to us. Sanjay Gupta, Sujoy Ghosh...so many came and went from PNC. It makes no difference to us.'

Asked if the sequel would also be made by Saket Chowdhary, the director of 'Pyar Ke Side Effects', Pritish said: 'Saket Chowdhary is writing two scripts for us. He could be directing the sequel. Whether he does or not, we go ahead with it. Directors will come and go. We'll go on doing what we believe in. That's the secret of Yash Raj Films' and Ekta Kapoor's Balaji Telefilms' success. That's how we function.'