After their much-publicised breakup last year, Bollywood actors Priyanka Chopra and Hurman Baweja met at a party recently but didn't display any hard feelings, said a source who saw the two dancing together. 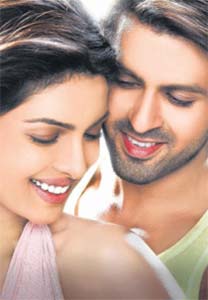 Featured Video
The party was thrown by filmmaker Ashutosh Gowariker last week to celebrate the completion of a 100-day shooting schedule of his romantic comedy 'What's Your Rashee?', in which Priyanka and Hurman are playing the lead roles.


'Hurman and Priyanka were together on the dance floor. Both of them greeted each other cordially. There was no awkwardness between them. In fact the duo, though at a distance, were enjoying dancing on the floor,' the source told IANS.


Both actors, who made news with their breakup last year, danced along with Gowariker and his producer wife Sunita, and the foursome had a 'good time together'.


According to the source, Hurman and Priyanka walked in late for the party, but at different hours.


'Hurman came in late and immediately hit the dance floor, joining the other cast and crew members of the film. Priyanka came in with her mother just before midnight.


'But by the time Priyanka began dancing, Hurman was busy mingling with other guests. And later the crew members dragged him to the dance floor,' the source added.


Incidentally, the party was held on the same day when Gowariker's magnum opus 'Jodhaa Akbar' completed 100 days of celebrations.


Barring a song which is to be shot with Priyanka soon, the film, to be released Sep 25, has been shot completely.


'The party was a celebration of our magnificent journey. There's a song that will be shot later in June because we require the terrain to be sparkingly green. Otherwise, we are done with 'What's Your Rashee?' said Sunita.