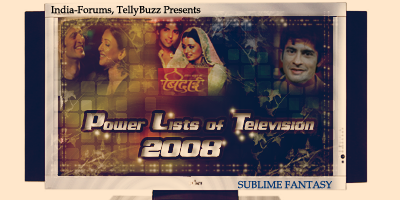 
On the Occasion of Diwali we are listing out 10 most powerful Celebrities of Television.The list has been  formed keeping many things in mind, starting from how much moolah they made last year to how much media attention they received. So here is Telly Buzz 's annual list of the 10 most powerful people of television.

The Top Ten most influential celebrities of small screen are as follows:

Ekta Kapoor : The Queen of Soap operas, let's continue to call her this, irrespective of her latest equation with Star Plus, which has turned bitter with her long running shows Kahaani and Kyunki ending or on the verge of ending, still rules as she has given television many popular stars of today, like Ronit Roy, Hiten Tejwani, Rajeev Khandelwal, Prachi Desai, Smiriti irani and many more.

Rajan Shahi : The Crown of Ekta is in real danger, thanks to Rajan Shahi of Directors' Kut and his show Bidaai, which has changed the fortune of many and has almost ended the monopoly of Balaji Telefilms from the Idiot box. As the stats show, Bidaai enjoys the best TRP's of all time and has taken over the prime time slot from Balaji. If the latest rumours are to be believed, then Rajan Shahi's new show is all set to displace Kyunki Saas.

Subhash Chandra : The CEO of Zee Television is 3rd in our list, with many channels and power under his kitty. Zee TV was the first private channel that was launched in and he has turned television on its head. Recently  Zee TV has lost its second place to the newly launched channel COLORS, but to take him lightly and write him off would be a big mistake, as he is determined to rule the small screen all over again!Sunjoy Wadhwa : The head of Sphere Origin who has given us shows such as Saat Phere, Mohe Rang De, Grihasthi  and of course Balika Vadhu. Balika Vadhu  has single-handedly changed the fortune of the new and promising channel COLORS, and has turned the tide in its favour. Currently riding on the success of these shows, Sunjoy deserves a spot in our Countdown as his shows are enjoying prime time slots across many channels.

Smriti Irani : If Ekta Kapoor is Czarina of Television, then she is definitely her most famous discovery till date. An actor turned producer, who is now giving her mentor a tough competition in producing shows. As they say, any publicity is good publicity, and the latest showdown on Waaris sets proves just this. Hope the coming year brings Smriti more success in every field, whether it is acting, politics or producing shows, that too successful ones.

Rajeev Khandelwal : One of the latest and successful migrants from Television to Big screen ! He is probably the only actor who even after leaving Balaji camp has survived and in a big way! That’s the kind of popularity he holds over television audience across the globe. It does not matter whether he is visible on TV these days or not, but will always be remembered as a product of Television.

Ronit Bose Roy : An actor who was written off by the big  screen and embraced by small screen, so much so that even King Khan himself talked about his popularity on TV. His presence in any show guarantees high TRP's and the recent dance reality show Aaja Mahi Way is the latest example where viewers saw the show more for him and less for participants. He is definitely both Badshah and Shahenshah of Small screen.

Hiten and Gauri Tejwani : The most sought after and the most famous and loved couple of small screen. Their journey started with Kutumb and even after many years, they are still going strong and have maintained their popularity. Their fan following is unparallel as their presence is enough to make the audience watch any show or event.

Sharad Malhotra and Divyanka Tripathi : Whether they are a couple in real life or not is still a million dollar question! But they are definitely the cutest couple of reel life. The success of their show Banoo Main Teri Dulhann belongs to them and their onscreen chemistry. They  have written their success story, and the many awards and accolades they have won is simple example of their popularity and their stature on television in recent times.

Nivedita Basu : The Creative Director of Balaji Telefilms and right hand of Ekta Kapoor enjoys the tenth spot in our countdown. She has the tenacity to face every obstacle, be it media and actors alike. Her straight forward and tough approach makes her a winner, as she is handling many shows simultaneously and tirelessly.

Now Lets move on to…Top 5 Male and Female actors of Television in the year 2008, The list is purely based on the popularity of their shows and kind of media coverage they have enjoyed in the past one year.

Sharad Malhotra : Banoo Main Teri Dulhann is still going strong, so is Sharad Malhotra. One of the most talented actors of Television, he enjoys the number one position.

Husein Kuwajerwala : From acting to anchoring to dancing, he is ruling everywhere and enjoys the second spot.

Karan Singh Grover : The latest pinup boy of Small screen has definitely become one of the Biggest stars of television. His instincts with anchoring is an add-on and has got him praise from all over.

Ronit Roy : Kahaani Humaarey Mahabhaarat ki may have failed to impress the audience, but not Ronit Roy, as he portrays a character larger than life and has definitely lived up to all expectations.

Hiten Tejwani : He is the ultimate warrior, very much like his latest onscreen avtaar "Karn" in Kahaani Humaarey Mahabhaarat ki, and enjoys the 5th spot in our countdown.

Smriti Z Irani : Tulsi and Smriti are inseparable, her popularity is beyond comparison as she  was, is and will always be the most loved Bahu of Television.

Divyanka Tripathi : The cutest and most charming bahu of small screen, she ruled television over the last year and sets to repeat her success this year.

Sara Khan and Parul Chauhan : Sisters in the show and best friends off screen, they enjoy the fourth spot in our countdown. They are the new entrants in television arena, and are all set to rule this medium in the years to come.

Juhi Parmar : This is one of the most successful year for this beautiful and talented actor, both professionally and personally.

Neha Bamb : There are many contenders for the fifth spot  like Rajshree Thakur, Shubhangi Atre, but she narrowly surges ahead to be at 5th position.

PS : This List is completely the views of India-Forums' Tellybuzz.

ashukaushik21 11 years ago Ronit is d Personality of d Decade in all aspects whether its Popularity,good luck,money,power,respect all that he got only behalf of his great hard work nd almighty God's Mercy.

+ 4
14 years ago why Harshad Chopra is not in the list.I think today he is the most popular Tv actor with huge fan following.For me Harshad just rocks.he should be number 1

14 years ago ohh i was hoping harshad wud be init...bad ppl.. stuck on few actors only...but anyhow he is new nd will be InshAllah next tyme here..:)

14 years ago What about the heart throb of millions -Karan Patel of Kasturi, Nach Baliye, Kaho na yaar hai, KJBKT-- He is a fantastic actor and should have a place in the talented and acting category. THIS IS NOT A FAIR OR ACCURATE LIST. All you have is ''HAS BEENS''

14 years ago He is one of the most talented actors of television.He injured many times during dharamveer serial.Phir bhi itna hard work karta hai .Why is he not include in this list. I am very dis appionted from your list.

14 years ago Happy 2 c karan there even smirti but where is Nandani...??