View Profile
If the grapevine buzz is anything to go by, then Pooja Bose will soon be shown the exit way on Balaji Telefilms and Imagine's Sarvagunn Sampanna. 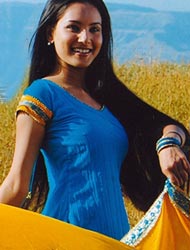 According to a source, "Pooja Bose, who is the lead girl of the recently launched Imagine and Balaji show Sarvagunn Sampanna, might be replaced.  She is supposedly giving a hard time to the creatives by throwing tantrums.  She is also not coming to sets on time."

The source goes on, "One major thing which is going against Pooja, who had debuted as Radha in Ekta Kapoor's interpretation of the Mahabharat on 9X, is her lack of popularity. After the ill fated 9X show crashed, she went on play the lead in Ekta's Tujh Sang Preet Lagai Sajna on STAR Plus which again never really rocked the TRP charts as well."

Our source adds, "No final decision has been taken either way".

When we spoke to Pooja Bose, she asked us to speak to the production house.  "I don't want to comment on this. I don't know anything on this and am hearing it only from you," was all she could say on being probed further.

When we texted Ekta Kapoor regarding the same, she replied, "No idea, I don't know."

We tried to contact Imagine but they remained unavailable for comments.

+ 6
10 years ago "I dont know" means it could happen...its not a definite no...wonder who they might bring in

NehaLovesAamir 10 years ago Why do they change their protaginists for. Changing the supportin actors/actresses is ok but the lead. Alot of shows seem to be doing that these days! Its really annoying! It makes you not want to watch the serial at all.

+ 4
10 years ago well she was nice but if she is throwing tantrums n all then its justified to replace her !!!

+ 2
10 years ago I think Pooja is perfect for the role of Swara. She's playing her part very well. The male lead on the other hand...Certainly lacks emotion, and looks a bit old compared to Pooja.

10 years ago argh!!! typicality... the new trend is of changing the female leads claiming it to b unpopular face... Just temme one thing... r the casting directors... blind??? Y dont they take dese points into account b4 castg them..... n cumon!!! If u want the show to du well...change the male lead...he luks like her father in law :P

superstar95 10 years ago Seriously if u wanna change neone change the male lead....im srryy but he doesnt luk gud with her......he luks 50 when she luks like 18......soooplzz its a request its a gud show thats the only thing i dont like!!

+ 3
10 years ago What can we expect more from Balaji productions ..