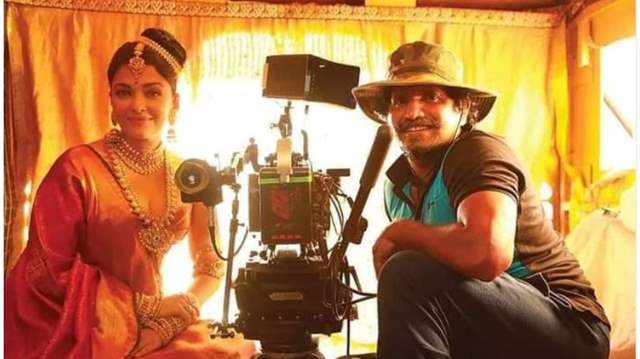 Since Mani Ratnam announced his magnificent period drama film 'Ponniyin Selvan', fans have been ecstatic and eagerly waiting for it to appear on the big screens.

While the first-look posters of all the characters have been out, a behind-the-scenes image of Aishwarya Rai Bachchan as Nandini from the upcoming Mani Ratnam film has been making rounds on social media. In the picture, Aish can be seen exuding her royal charm as she sports the elegant ethnic attire.

Aishwarya last appeared in the 2018 movie Fanney Khan, and now will be seen in Mani Ratnam's Ponniyin Selvan: Part One, taking over the screens as queen Nandhini, ruler of Pazhuvoor.

As seen on the PS: 1 poster, Aishwarya looked stunning in custom silk and traditional jewellery. The actress's hair was done in a middle-parted touseled manner, and she could be seen facing away from the camera. A medium-sized crimson bindi, a maang-tika, and a statement nose pin were all displayed on Aishwarya's face. After eagerly anticipating her on-screen debut, the actress's admirers couldn't stop praising her grace and soul on social media.

The film is set to release on September 30 in Hindi, Tamil, Telugu, Kannada and Malayalam. The music of PS 1 is created by AR Rahman while it’s produced by Lyca Production and Mani Ratnam’s Madras Talkies.

+ 7
3 months ago Cannot wait for this one