Gurdeep Kohli, who has been adored by one and all for her remarkable portrayals in Sanjeevni and Sinndoor Tere Naam Ka is the new face for the much-loved protagonist in Ekta Kapoor’s Kasamh Se, ‘Bani’. 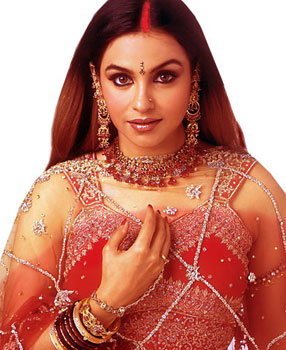 Featured Video
The buzz around had earlier put the spotlight on three big names of Television – Gurdeep Kohli, Nausheen Ali Sardar and Pallavi Kulkarni for the coveted role, but the news now is that Ekta has zeroed in on the gorgeous Gurdeep.

A very excited Gurdeep Kohli got candid as she talked to Telly Buzz about her role. “I am really happy on getting this role, mainly because this is a big comeback for me. This will be a hat-trick too, as I have successfully portrayed two popular characters in the past, one being Juhi in Sanjeevni and Vedika in Sinndoor Tere Naam Ka. Now playing Bani in Kasamh Se is an icing on the cake”, quips Gurdeep.

Prachi Desai’s fan following sky-rocketed in no time, and she has been the ‘Darling of Masses’ when it comes to playing the character of Bani. So what made Gurdeep to sign this role? “The reason why I took this role is because the character I will be playing is not new to me. I have always played a simple girl, nice sister, good bahu and a great friend, so it will not be difficult at all to portray Bani. Also, Kasamh Se unit have a great bunch of creative writers and I have full faith in them. Above all, I very well know that I will give this role my 100%, so why fear?”, states the actress, who was last seen in Bhabhi.

Answering the major question of whether the audience will accept her as the new Bani, the confident actress quips, “As I said, it will not be difficult for me. I will go by the script and enact my role, and I don’t find any reason why the viewers will not accept me as the new Bani”.

Lastly, about her entry into the serial, the pretty actress states, “Bani (Prachi Desai) will be shown as getting lost somewhere, and when she gets back, I will make my entry”. So does it mean that Bani will go thro’ the 'usual' plastic surgery route? “Well, I really do not know about this”, comes the quick reply from Gurdeep as she signs off..

As all eyes look for the new Bani now, let us bid farewell to Prachi 'Bani' Desai..

pakistanichic 13 years ago we will miss you prachi and to gurdeep, i know you will do a great job as bani

13 years ago Well I use to look at Sindoor Tere Naam and was sad when Vedika died, but can she pull it of as Bani as Bani was so much younger than jai...Let's wait and see. I wish her good luck but I can't emphasize enough how much I will miss Prachi.

+ 2
13 years ago WOW I NEVER watch kasamse.. but for gurdheep will surly watch it as she is a wonderful nd & gorgeous actress..luv her..

13 years ago she doesnt look like shed be a mahan kinda face..

sweetyz 13 years ago it is nice to have gurdeep back in zee tv dramas especially in one of our top programme Kasam se. But prachi aka bani will surely be missed!!