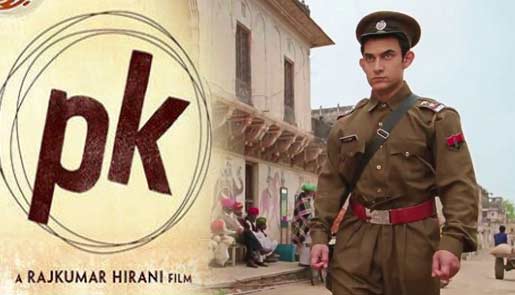 The "provocative, yet gentle" Aamir Khan-starrer "P.K." has already crossed the Rs.200 crore mark at the domestic box office, but the Rajkumar Hirani directorial is facing ire of Hindutva elements in cities like Agra and Bhopal.

Featuring Aamir as an alien, the movie that released Dec 19, takes a hard-hitting swipe at organised religion, god and godmen.

Accusing Aamir of double standards, and advising him to go to Pakistan, Bajrang Dal and Vishwa Hindu Parishad activists jointly intruded into the Shree Talkies in Agra Sunday evening to disrupt screening of "P.K.".

Madan Sharma of the Bajrang Dal and Rajendra Garg of the VHP criticised Aamir saying that he was displaying his anti-Hindu sentiments by ridiculing Hindu gods and goddesses in the film.

Some of the Hindu activists also staged protest Monday in front of Jyoti cinema hall in Bhopal, Madhya Pradesh. Bajrang Dal state vice president Kamlesh Thakur said that "P.K." should be immediately banned and they will submit memorandum to Madhya Pradesh government soon regarding the same.

Police superintendent (city) of Maharana Pratap Nagar, Arvind Khare told IANS: "People who were protesting in front of the hall have been stopped. They were not mishandled and no one was arrested".

"P.K." had also led to Twitter battle. Thanks to different opinions, #BoycottPK and #WeSupportPK were recently trending on the micro-blogging site.

"People may agree and may even disagree but then they have to respect it (the concept of 'P.K.') because we are also respecting their view," said Boman, who has a key role in the film.

Actress Juhi Chawla, who had bought 30 tickets of "PK" for her family, had also tweeted: "I have some issues with PK ... I agree with a lot of things but disagree with some. Now THATS a good film. One that stirs thought and discussion".