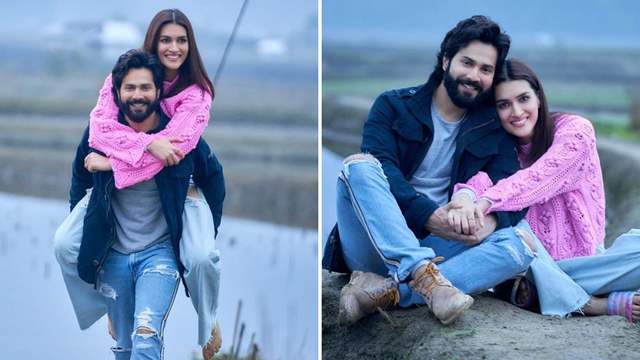 Last month, Varun Dhawan and Kriti Sanon had jetted off to Arunachal Pradesh to kickstart the shooting of their film Bhediya. The duo had been sharing pictures and videos as they enjoyed their time in the North East.

And now, Kriti Sanon has wrapped the shooting of Bhediya in Arunachal Pradesh. Her co star Varun, shared two adorable pictures with the actress and penned a sweet note for her. VD wrote: “Kya lagti hain hai Raaba. Bahut maaza ayaa apka saath @kritisanon #wolfpack. It’s a sched wrap for Kriti on #BHEDIYA as we say bye to ziro. Will miss you both.”

In the pictures, a bearded Varun looks dapper in a black jacket and blue denims whereas Kriti looked every bit beautiful in a pink coloured woollen sweater and denims. She can be seen enjoying a piggyback ride in one of the pictures. Have a look:

Kriti also shared the same pictures on her Instagram handle and penned a note as she completed the film shooting. She wrote: “And its a schedule wrap for me in Ziro for #BHEDIYA! From Dilwale to Bhediya and all the years of friendship in between, we’ve come a long way @varundvn.. Gonna miss you, the captain of our pack @amarkaushik and the entire Wolfpack. See you guys soon!! And bye bye Ziro!”