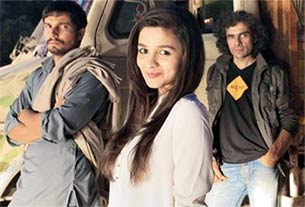 Continuous landslides, narrow and perilous roads - the journey of the "Highway" team was full of danger while driving down the road to Tabo in Himachal Pradesh to shoot for director Imtiaz Ali's road movie.

The crew members' perilous journey is captured in the latest episode of "Highway Diaries", a short video snippet.

They drove through the narrow and perilous roads of the northern state with continuous landslides. A big stone fell from the mountains and broke the windscreen of one of their cars, forcing them to halt and wait for the bulldozer machines to clear the road, said a statement.

The video diary ends with actress Alia Bhatt, who features in the film, delivering her lines that rightly describe the breathtaking location - "Tumne kabhi bataya nahi ki duniya aisi bhi hai, unbelievable! (You never told me that world is like this)".

Presented by Sajid Nadiadwala, "Highway", which stars Randeep Hooda in the male lead, captures the landscape of the various regions in the country.

The crew has already shot in Jammu, Delhi and Punjab. The film will hit theatres Feb 21.

Aly Goni questions 'what about justice for Sushant Singh ...
4 minutes ago

exclusive
Exclusive Barun Sobti on being away from TV: My problem is the ...
37 minutes ago

exclusive
Exclusive Jaan Kumar Sanu on keeping up with Bigg Boss 13, looking up ...
54 minutes ago

Subuhii Joshii loses weight all by herself
an hour ago