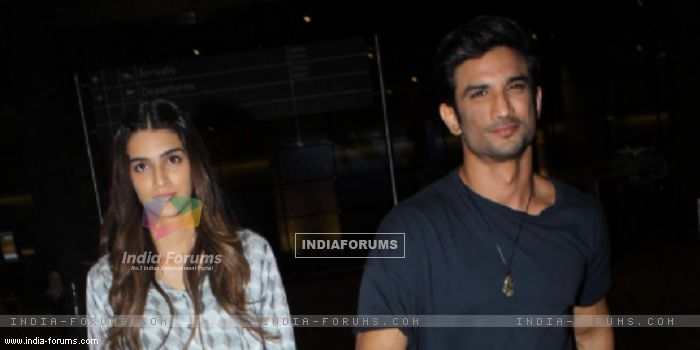 After their crackling chemistry in "Raabta", Sushant Singh Rajput and Kriti Sanon have shot for an ad film and are set to perform together at the upcoming IIFA celebrations. The actress says people seem to be finding a "connection" between them.

Considering how much they are being seen together and working together, have they found a 'raabta'?

"I think people are finding a 'raabta' in us, which is why we are being asked to do things together... But it's always great working together... A comfort is there," Kriti told IANS here on the sidelines of a press conference on Tuesday night.

The onscreen chemistry apart, the off screen camaraderie between the two actors has been much talked about in recent times.

They will take the stage of the 18th International Indian Film Academy (IIFA) award ceremony in New York's MetLife Stadium for a special performance on July 15. "We will be performing on retro Bollywood songs and move to our contemporary numbers," said Sushant.

Kriti, who will perform at IIFA for the first time, added: "Actually it is very interesting because it's like a 'sawaal-jawaab' (question-and-answer) style thing... One song is related to another, and we are going from Shammi Kapoor's songs to our own tracks."

They have also recently shot together for a video on CloseUp's "Paas Aao" track.

"We are performing on that as well... The choreography of the song is really nice," Sushant said.

Interestingly, Sushant had first performed at an IIFA gala in 2006, as a back-up dancer. After making his film debut with "Kai Po Che!", he got a chance to take centre-stage at the Bollywood celebration in 2013, and now he is excited about performing again.

"I still perform the way I used to perform, just the camera's focus has shifted," quipped the actor, who is also nominated in the best actor category for his performance as cricketer Mahendra Singh Dhoni in "M.S.Dhoni: The Untold Story".