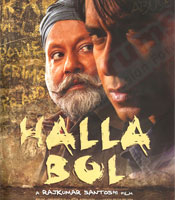 'Halla Bol', will have a Quawwali 'More haji piya' by Pakistani singer Amjad Farid Sabri in the film. Shot at Haji Ali, this song is picturised on artisteS Ajay Devgan, Vidya Balan and the singer himself. Well known for his singing in Pakistan, this is the first time that Sabri will be seen in a Hindi film on screen. "This is a very spiritual song. Earlier this song was to be included only in the music album but later it was decided that it would be in the film since it's very vocal of the mood of the film," comments music director Sukhwinder Singh. Incidentally this particular song in the Raj Kumar Santoshiis film  is composed by music director Vanraj Bhatia..
Featured Video