It is not just Indian box office where Jannat is creating 'dhoom'. Apart from taking one of the best openings of the year in India, the film has found good reception internationally as well, hence turning out to be Emraan Hashmi's biggest success in the overseas market.

This is how the break-up of collections over the opening weekend (Friday-Sunday) in some of the major markets looks: 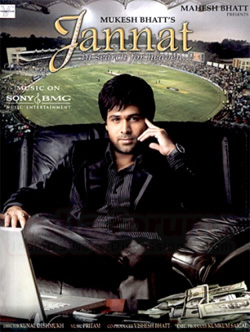 Says an industry insider, "This pretty much tells the growing equity of Emraan Hashmi over the years. His Awarapan may not have worked last year but for perhaps the first time ever in his career, his performance was 'respected'. Internationally, too, Emraan has started making a big impression which is pretty much apparent from the way Jannat has opened."

Drawing comparisons with Tashan, she adds, "While the film boasted of stars like Akshay Kumar, Saif Ali Khan, Anil Kapoor and Kareena Kapoor, it sunk in a big way and didn't take an opening which was anticipated from a movie of this grandeur. On the other hand a small film like Jannat has sprung a huge surprise and defied all speculations/calculations to turn into a huge success."

Traditionally Bhatt films have hardly been released overseas, let alone making a huge impression there. Jannat seems to have reversed their fortunes.

"Pretty much so", says the expert, "In fact the kind of opening which the film has taken is on par with that of John Abraham's biggest opener there - Taxi No. 9211. UK is certainly not Bhatts market which clearly indicates that the film has worked primarily on Emraan's name."