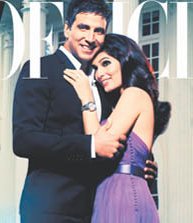 We last saw Mrs. Akshay Kumar, Twinkle Khanna, in the 2001 film Love Ke Liye Kuch Bhi Karega. Since then, she has been busy with her role as a entrepreneur. And of course, as a homemaker.


Despite the self elected hiatus, Twinkle has been getting many offers to star in commercials, and after many attempts, Akshay has finally cajoled her into starring in an ad for the cell phone brand that he endorses. The ad will be directed by Anurag Basu, who in terms of previous advert directing experience has worked with SRK before.

Twinkle's ad, Basu maintains, will be simple, and shall mingle the fun and glam elements of her personality to bring them forth on screen.

The limelight shying married and mommy Mrs.Twinkle may yet be seen making a screen comeback - if all works with Akki's many persuasions with her!