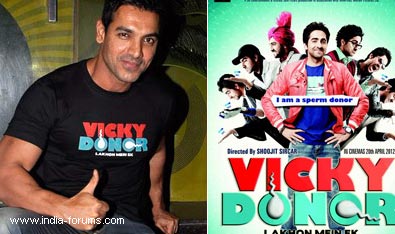 has done exceptionally well at the box office. John Abraham's says he is enjoying the success of his maiden production venture, but hasn't planned its franchise yet.

"I am enjoying every second of the success of 'Vicky Donor', but I have not thought about a sequel to the movie," John told reporters here Thursday. He was speaking at a Castrol Power 1 event.

"Vicky Donor" was directed by Shoojit Sircar who roped in newcomers - Ayushmann Khurrana and Yami Gautam - for the film. Annu Kapoor too played a pivotal role in it.

John is now producing a film titled, "Hamaara Bajaj". Once again, he has roped in Sircar and Veejay-turned-actor Ayushmann for it.

He will also produce "da" and "Jaffna".