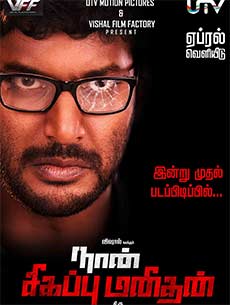 Director Thiru says he's not nervous about releasing Tamil thriller "Naan Sigappu Manithan" alongside superstar Rajinikanth-starrer "Kochadaiiyaan" on April 11. As of now, he is only concerned about completing the film before the release date.

"I'm not going to compete with any film and nor am I nervous to release my film with 'Kochadaiiyaan'. I'm only bothered about handing over the first copy of my film to my producers in advance. I'm only concerned about finishing the film on time," Thiru told IANS.

"Moreover, my producers zeroed in on the release date even before the makers of 'Kochadaiiyaan' did. Therefore, I always worked keeping in mind the release date and not worried about which film will I have to compete with," he added.

Thiru says working towards a deadline kept him engaged.

"My last film got delayed due to several reasons. I struggled to see it release in cinemas. It was nice for a change to be working against a deadline. Working towards a scheduled release date kept me on my toes throughout," he said.