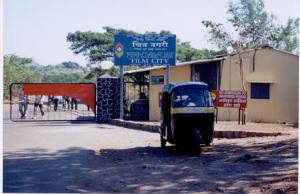 It seems that the board of film city has taken a head on heels considering the security of that place; therefore they have made a union in order to increase the number of security guards in the premises for which they are on a strike today.

A source informs, "As the Film City premise is vast and vulnerable to thieves, animals and anti social personalities, it's high time that the security guards in that area are increased. Therefore it was declared yesterday itself that there won't be any shooting or any one working at the place today."

The area is not very transport friendly and a lot of cases of robbery have come into being but this decision was taken after a serious incident occurred there, a girl was apparently molested in the public in the night. So it was a joint decision taken by the security and the producers of the show so that in the future the cast does not fall pray for such incidents in future.

Rubina Dilaik of Chhoti Bahu fame confirmed the strike while Ather Habib from Yeh Rishta Kya Kehlata Hai too affirmed on the closure.

Hope the security demands are fulfilled at the earliest...

9 years ago will this effect the show...will v b still able to c the shows day to day...or is it going to happen like what happened a few yrs ago

+ 4
9 years ago well u guys doing the right thing well that girl being molested is not a joke...gud job rubi and ya even in CB u ding marvelous work

9 years ago rubina you really doing amazing in CB..also love your chemistry with avinash or as dev radhika you both rocksss

+ 2
9 years ago Hope everything gets under control.Rubina your re-entry was simply superb.

+ 2
9 years ago hope every thing allright
Rubi love your re-entry in CB...

Akbar1 9 years ago i am sooo happy to get u back rubi...
have that passionate smile on ur face always...

+ 2
9 years ago Hope the security aspect improves and the safety of the actors who are working for the sake of entertainment is well protected.

rishanew 9 years ago I hope security issues are resolved to keep Rubina and the other actors safe.

+ 3
9 years ago LOL uh oh? arent like most shows shot in film city :S I think navya is and a bunch other so good luck to all the shows who don't have their sets :P

+ 2
9 years ago Hope nothing serious happened to the girl and they resolve the security issues quickly so it is a safe environment for everyone to work there.