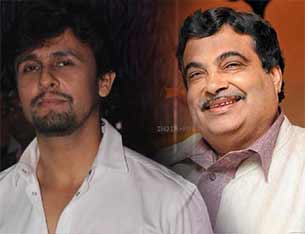 Senior Bharatiya Janata Party (BJP) leader Nitin Gadkari was caught in a jolly mood in the capital Wednesday, a day the city-state is voting for the Delhi assembly elections. He let his hair down and matched ace playback singer Sonu Nigam's impeccable vocal chords at a conclave here.

Sonu was here to speak at the India Today Group's conclave Agenda Aaj Tak as part of the first session "Sonu Ki Sargam", and Gadkari was slated to talk during the second session.

However, the politician turned up earlier to listen to Sonu, who is one of his favourite singers.

Gadkari requested the singer to croon a song of his choice, and the latter sang "Sandese aate hain" from the movie "Border".

"It is one of the most important songs in my career. It was one of the first songs that got me mainstream success," Sonu said.

It was then that Gadkari was urged to sing "Tujhse naraaz nahin zindagi" along with Sonu, who gave the politician's talent a thumbs up, and said: "Surr hain".

While speaking at the session, Sonu talked about the viability of reality shows, his emergence as a singer, his past decision to keep long tresses, the lyrics of present-day songs and the advantages and disadvantages of technology on the music industry.

Seasoned ghazal singers Talat Aziz and Pankaj Udhas were also part of the audience at the session. They too showered praise on Sonu.

Tiger Shroff shares his experience on receiving ...
38 minutes ago