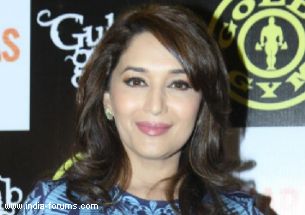 Artists often talk about the hardships they have had to face in finding their first big break in filmdom, but 1990s diva Madhuri Dixit says she never had to struggle and the offer came to her door step.

She entered filmdom with the 1984 film "Abodh", which was made under the banner of Rajshri Productions.

"I have never struggled for anything in my life because I never thought I will be an actress. Film just walked up to my house with 'Abodh'. We met them (the makers), then my family decided that I will do just one film," Madhuri told IANS and added that her family used to run away from movies.

But destiny had stardom in store for Madhuri -- she didn't stop at one film and continued to work in movies like "Awara Baap" and "Uttar Dakshin", which didn't do much to her career. It was the 1998 release "Tezaab" that catapulted her into big league and there was no looking back for her afterwards.

"Struggle was to prove myself, to do my best... so those things were the struggle for me. I am thankful to whatever I have got in my life, but one thing which is always at the back of my mind, is my dance academy. I would love to see my dance academy growing," said the actress of super hits like "Ram Lakhan", "Dil", "Saajan", "Hum Aapke Hain Kaun" and "Dil To Pagal Hai".

Recently she made an impressive come-back with "Dedh Ishqiya". In terms of numbers, the film didn't set the cash registers ringing, but the 46-year-old won plaudits for her performance.

Currently, she is busy promoting her next release "Gulaab Gang", coming out March 7, and says she took reference from various women to prepare for the role.

Directed by Soumik Sen, "Gulaab Gang", which also features Juhi Chawla in a prominent role, draws its inspiration from the real life vigilante group 'Gulabi Gang', which operates in the Bundelkhand area of Uttar Pradesh under the tutelage of Sampat Pal.

"I took references from all the women in the world. Rajjo is representative of all the women. She is fantastically portrayed on screen. There are women who are larger than life and it's a salute to them," said Madhuri.