View Profile
Neetu Chandra is certainly looking at a change of image. After enacting the role of a fully covered up 'Kathaiwadi' girl in Madhur Bhandarkar's realistic drama 'Traffic Signal', she would now be seen breaking all signals in her upcoming film 'One Two Three'.
Though her character of a Jat cop in the film doesn't quite allow her to showcase her glamorous side, a music video which has just been shot for the film does project her in a different light. Apparently, the girl, who made her debut opposite none other than super star Akshay Kumar in Priyadarshan's 'Garam Masala', would be seen in a red hot new look in the music video. 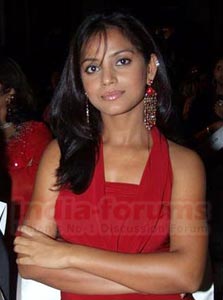 When questioned, Neetu Chandra neither denies the developments nor makes a big deal about it. "I have maintained from the very beginning of my career that I would change my wardrobe as per the requirement of a role and the project's setting. It isn't as if I have suddenly woken up to donning a glamorous persona for a film."

She goes on to add, "'One Two Three' is a fun film and all the actresses of the movie would be coming together for this promotional number. The song has sensual overtones and for a genre like this, it was but obvious for me to go with the flow. It's as simple as that. I thoroughly enjoyed shooting for the video and I am sure audience too would see a different side of me, which is different from the characters I have portrayed earlier."

What is notable is the fact that the three leading ladies of the film - Esha Deol, Sameera Reddy and Tanisha Mukherjee - have been known for their moves in numerous songs earlier as well. While Esha has 'Kashmakash' (Sunday), 'Naughty Naughty' (Cash), 'Tadap' (Darling) and 'Tauba Tauba' (Kaal) to her credit, Sameera has been known for keeping men interested, whether it is 'Race Sanson Ki' (Race) or 'Ishq Kabhi Kariyo Naa' (Musafir). Meanwhile, Tanisha too had gone all out in 'Neal N Nikki' in a serious attempt at changing her image and appearing as a sex kitten.

In comparison, this is the first time ever that Neetu would be seen in a different avtar. Laughs Neetu, "Yes, it may turn out to be shocking for some value. In fact on the sets, there were quite a few people who couldn't quite recognize me. I had to pinch and tell them that I am the same old girl who was just recently all dressed up as a rough talking cop originating from Haryana."

The promotional number in question is composed by Raghav Sachar who has just came up with 'Manzar' in 'Sunday' and had earlier created some fantastic tunes for 'Kabul Express'. Directed by debutant Ashwani Dheer of popular TV show 'Office Office' (starring Pankaj Kapoor), 'One Two Three' is a comedy of errors which stars Sunil Shetty, Tusshar Kapoor, Upen Patel and Paresh Rawal as the male leads.

A co-production of Eros Entertainment and Kumar Mangat, 'One Two Three' is aiming for a theatrical release on May 21. -(SAMPURN)