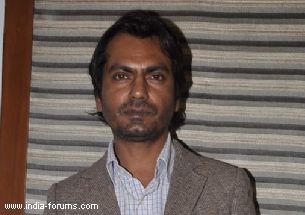 After doing comedy in his theatre days, actor Nawazuddin Siddiqui is excited to try comedy for the first time with his film "Ghoomketu".

"'Ghoomketu' is an out-and-out comedy film and I am doing such a film for the first time. However, I did a lot of comedy during my theatre days," the 39-year-old said here Wednesday at the Top Gear awards.

"The star cast of the film is very good, Anurag Kashyap, Swanand Kirkire my batchmate and Raghubir Yadav," he added.

Besides "Ghoomketu," Nawazuddin has six to seven films lined up for the year.

"Besides 'Ghoomketu' there is 'Mountain Man', Ketan Mehta's 'Monsoon Shootout' and 'Liar's Dice' which was at the Sundance festival this time. Another film is 'Haramkhor'," said Nawazuddin.

He was recently seen in "Miss Lovely" and "The Lunchbox."