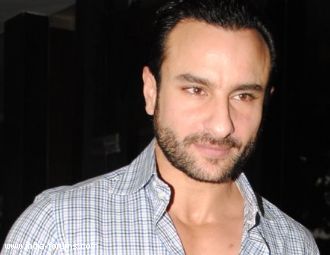 Controversies dog stars and Saif Ali Khan is no stranger to them. The Bollywood star, who was embroiled in a black buck hunting case in 1998, is again in the dock - this time for punching a South African businessman at a five-star hotel here.

He has been accused of abusing and hitting 44-year-old Iqbal Sharma of Indian origin at a restaurant in the Taj Mahal Hotel.

Saif entered into a scuffle following Sharma's request to the restaurant manager to ask the actor and his celebrity friends, including Kareena Kapoor, Amrita Arora and Malaika Arora Khan, to keep their voices down.

At a chance encounter, Saif called Sharma an "idiot", before pushing him and his father-in-law.

A complaint was been file against Saif Wednesday.

Earlier too, Saif has been involved in public spats.

In September 2008, Saif was booked for allegedly assaulting a photojournalist in Patiala.

In 1998, he was charged with poaching two endangered black bucks during the filming of "Hum Saath Saath Hain". It was a dent in his career, and also left the Bihsnoi community in Rajasthan upset when he won the Padma Shri award in 2010.

His father, the later Mansoor Ali Khan Pataudi was charged in a separate case for poaching a black buck.

He was under media scrutiny when he decided in 1991 to split from his first wife, actress Amrita Singh, after 13 years of marriage.

He was later reported to be dating Italian model Rosa Catalano. But that too crumbled.

Currently, Saif is dating Kareena. So far they are in a steady relationship and there are rumours that they will tie the knot this year.

From Sid, Bunny to Ved, Barfi: Life Lessons that Ranbir ...
4 minutes ago

exclusive
Exclusive Bigg Boss 14: Sakshi Chopra decides to give the show a miss ...
41 minutes ago