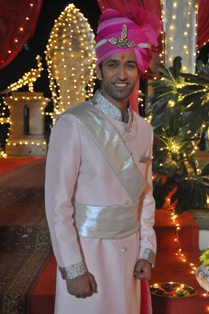 Nakuul Mehta aka Aditya who is the chocolate boy of television will soon be seen tying the knot with his on screen wife Pankhuri (Disha Parmar) in full Sooraj Barjatiya style lavish wedding in his show Pyaar ka Dard hain.

The talented actor who is very excited for his on screen wedding will be seen wearing the same Safaa and head gear that he had worn for his real wedding with his wife Jankee.

The actor who had to unfortunately back out from Nach Bailye season 6 because his wife's knee injury is very happy that the production house could incorporate it in the wedding.

The costume designer even made him wear a similar sherwani that he wore for his real wedding. This is not all Nakuul called the same person from Rajasthan who had tied it on his real wedding.

When contacted Nakuul he said, "The kalangi on the safaa and the sword will carry during the on-screen wedding is a family heirloom, which is about 140 years old and has been passed on from his great-grandfather. It has been a great wedding shoot till now. We are all looking forward to audience reaction."

ARDR 6 years ago Nakuul u were looking like a prince ...
Love u

Tacker_Holic 6 years ago Love you Nakuul Mehta you are looking like a prince! Really love the sherwani you are wearing and the personal touches! Disha girl you are looking stunning in that lengha!

Tacker_Holic 6 years ago Love you Nakuul Mehta... you are a true prince! You look stunning with Disha Parmar... the best wedding ever!

shai95 6 years ago Royal family? Mehtas were never the rulers in rajasthan. They were the trader class. whatever it is, but he surely looks nice in this attire

MereMahiyaa. 6 years ago Loveee u nakuul the wedding is gonna be amaaazing

kavmuks 6 years ago He is from Royal family , Prince so his wedding attire is worth this honor for sure..

...you are rocking in the wedding attire!!

ananya2010 6 years ago Nakul you are a sweetheart. Love your friendship with Drashti.

Kangana Ranaut is in Awe of Yogi Adityanath; Applauds his ...
12 minutes ago

Farhan Akhtar is excited to kick-off the opening match of ...
19 minutes ago

Arjun Bijlani on music video with Reem Shaikh: I feel Ishq ...
39 minutes ago