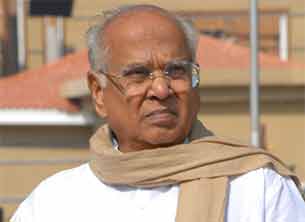 "Akkineni Nageswara Rao was one of the Indian cinema's stalwarts, who will be remembered for his rich contribution. Saddened by his demise. RIP," Modi posted on his Twitter page Wednesday.

The Telugu actor succumbed to cancer Wednesday morning. He was 89.

Popularly known as ANR, he is survived by three daughters and two sons, including popular actor Nagarjuna.

He made his debut in 1941 with "Dharmapatni" and is known for his performances in "Devadasu", "Laila Majnu", "Anarkali", "Premabhishekham", "Prema Nagar" and "Megha Sandesham".

Before falling ill, he was shooting for "Manam" with his son Nagarjuna and grandson Naga Chaitanya.

Huma Qureshi Loses Cool; Says She has been 'Unnecessarily ...
27 minutes ago

2020 is Turing Out to be a Fruitful Year for Prabhas!
27 minutes ago