Friday night's episode had 'Club Mixes' as the theme; so one could expect the episode full of fun, masti, excitement and fireworks! About the dancing, like Vaibhavi said..it should be a 'stage-tod performance'..strong enough to compel her or anyone to get up and dance!

The 'Club Mixes' round introduced another new concept on the show - that of an 'Energy-Meter' that rated the jodi's energy levels as 'thanda', 'theek-thaak' & 'garma-garam'. 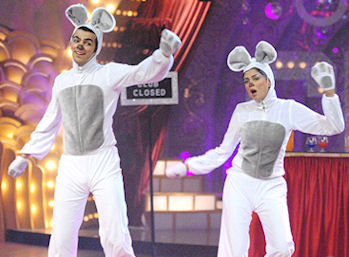 Featured Video
The episode began with Kushal Punjabi & Rucha Gujrathi's performance to the foot-thomping current hit, 'Mauja Mauja' from the film Jab We Met, which incidently was also the sub-theme of the episode. All the jodi's presented their 'jab we met' stories and let in onto some really sweet moments. The first performance of the evening was from the 'hot' couple, Pooja-Hanif. After having scored 100% in their previous round, expectations soared high! Pooja-Hanif were good..but could have been better. In comparison to their garma-garam performance in last week's 'Touch Baliye' round..this week was just about theek-thaak. Next came Karan-Kavita.. Theirs was a 'mice-dancing-at-club-shutdown' concept..and the thought that must have crossed a lot of minds was 'what were they thinking?!' Quite a disappointing performance from the duo and naturally, a performance that did not go down too well with the judges, hence some not-so-good comments and low scores. Kashmera-Krushna followed with a theek-thaak performance..definitely not worth a score of 27! Does Krushna's Govinda connection work for him??

Aamir-Sanjeeda's performance, once again found favour amongst the judges. David Dhawan commented that Sanjeeda reminds him of Karisma Kapoor from his movies..which left Sanjeeda ecstatic! Vaibhavi had complaints with Aamir for not exuding as much energy as required for the song! But in no way does it take away from their performance..which was, once again, fantastic! Even Vaibhavi took to the dance floor and showed some of her moves! Sweta-Alex gave, yet another consistent performance..though ofcourse, unfortunately, Sweta's shoe came off mid-way! But fortunately for her, she held on and continued dancing..which in turn, left the judges impressed. Sweta-Alex, once again, managed to take home some decent scores! 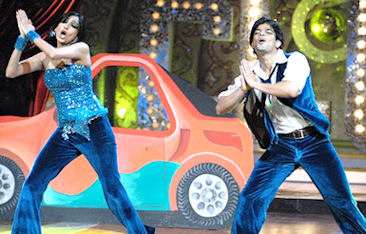 Karan-Amita - after some consistently & strictly okay performances, managed to dance their way into the hearts of the judges! The couple danced superbly and walked away with accolades and a good score too! Karan ofcourse is a good dancer..but Amita yet has a long way to go! Hopefully their good scores will boost their spirits and they will come up with some more wonderful performances! Maybe Vikas-Amita are their lucky mascots?! Vikas-Amita, post their elimination the previous week, were on the sets to cheer for their friends!

Last but not the least.. Rakhi 'Hunterwali' Sawant & Abhishek Awasthi! Yet again, this couple proved, why they are a force to reckon with! One amazing performance after another that leaves the judges & audience, spellbound! Needless to say, they got the perfect scores! And their choreographer, Pratap Shetty, was adjudged the 'Choreographer of the Day'! Truly deserving! 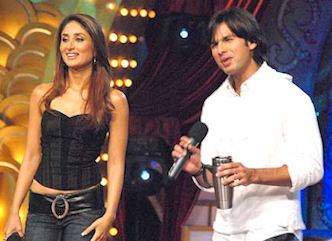 The elimination episode was dedicated to the 'Jab We Met' stars, the once-upon-a-time couple - Shahid & Kareena, who were on set to promote their film. Both the stars (apparently) had watched the performances of the previous day and expressed their opinions on the jodi's performances. Up next was Amrita Arora's wonderful performance and some fun moments with 'rate-the-handsome-hunk' contest, that had the female judges rate the male contestants. And who won? Karan Grover!

After all the fun & frolic, it was time to announce the eliminated jodi! While Shahid & Kareena announced the jodi's in the safe zone..the onus of announcing the jodi eliminated, was on Vaibhavi Merchant. And the eliminated jodi was - Karan-Kavita! Sad, but an expected elimination..as their performances were not upto the mark which resulted in continous low scores! Karan-Kavita took their elimination very graciously..with a smile on their faces! 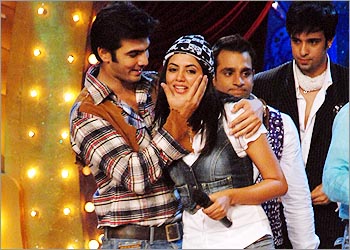 Lastly, Shahid Kapoor sure left all his female fans smiling..and dancing, with a befitting end - a jig to his popular number - Mauja Mauja! Which it truly was.. Fun, excitement, masti.. In one word - Fungama!
Stay tuned to Telly Buzz for more on Nach Baliye next week.. Some exciting performances and more..

14 years ago the Saturday's episode was very energetic and lively.

+ 3
14 years ago saw the epi! Vaibhavi danced too!!
and my god shocking Kareena

I was also shocked that Karan got the highest ratings lolzz!