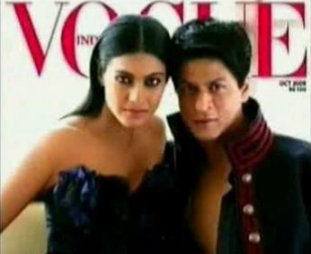 Ever since the release date of one of the most awaited movies "My Name Is Khan" was set on Feb. 12th, 2010, fans all over the world are dying to get a glimpse of the much loved couple Shah Rukh Khan and Kajol Devgan as Rizwan and Mandira!

Earlier the false rumor was that the first promo will be released with "Kurbaan," another Dharma Productions project, but now the buzz is that Fox Star Studios will unveil the look promo of the film with a huge Hollywood project "Avatar," directed by James Cameron of "Titanic" fame. "Avatar" is releasing world wide on December 18th, 2009!

"Avatar" has already created much hype, but now there's another huge reason to watch it! The photoshoot for the Vogue Magazine has already proved that the rocking Bollywood couple is back, but the promo will surely add more hype to the movie!  It's only anticipated that after the release of the look promo, the star cast, Karan Johar, and Fox Star Studios will get into extensive promotion to make sure the film gets the due response.

Well, the fans just can't wait to see SRK-Kajol together, we just wish that the movie lives up to its expectations.
Featured Video