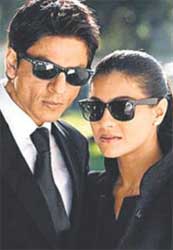 My name is Khan is a film that takes a shot at deciphering the trauma of when things go wrong for no fault of yours. It tells you that you may not be able to handle how this world works, but you should never let this make you indifferent. If it affects you, it's better you react.

Rizwan Khan (Shahrukh Khan) a person affected with Asperger's Syndrome, is highly intelligent. What he lacks in social skills he makes up for with scientific and technical skills. Rizwan grows up under the shadow of his mother who understands him so completely and raises him with the right set of values. She patiently tries to explain to him the little nuances of life. However, the over-protection of his mother towards him miffs younger brother who leaves for the United States as soon as he turns eighteen.

After the death of his mother, Rizwan wants to fulfill his mother's wish of living life in a way so he can find his happiness. He follows his brother to USA, thinking he'll make his fortune there. That's where he meets Mandira,(Kajol) a bubbly salon runner. She sets his heart fluttering and he doesn't stop until she says yes to his marriage proposal.

However, the date 9/11 changes everything in what seemed like the characters' picture perfect lives. Lives are lost. Dreams are shattered. Trust turns into betrayal and pain and agony become a part of everyday lives. What started at the crash site of the twin towers of World Trade Centre, has a slow ripple effect that sadly sucks the zest out of the lives of Asians all over like a deadly parasite.

When this effect reaches Rizwan, it's so bad it threatens to break his marriage. What his autistic mind instructs he can do to save his marriage he does. He goes against the odds, does what a normal mind would feel insensible and tries to salvage what's left of their crumbled lives.

The movie pulls all of the chords inside of you. The presentation affects you in a very emotional way. You sort of get lugged into Rizwan's world entirely and feel everything that he goes through. His highs are your highs. His lows are your lows. Then there is the magic of SRK-Kajol duo. It's simply lovable.

There is sarcasm for what is plain wrong but for nothing that's right. When it comes to portrayal of any community a very fine balance has been established. You get to see almost all the faces of humans out there in the world. The coward, the indifferent, the passing-the-bucker, the smarty pants, the fighter, the doubtful, the evil, the good...the list is endless. You just need to read the faces.

Relationships that traverse religious lines and what they go through when one party gets hurt in an ugly way is something no one discusses but has been presented delicately.

The way Rizwan's mother explains the only two different kinds of people in this world by drawing simple cartoony diagrams- the good and the bad. This message would have headed home to the biggest prat on this planet.

The film gives a much needed major lift to the image of Muslims thanks to the message loud and clear- My name is Khan and I'm not a terrorist.

Autism, love story, hurricanes, and 9/11 rolled into one. That leaves everything getting fragmented importance.

Not too much of Kajol and SRK mush. The film leaves you pining for more of their tender scenes. Also, Kajol goes invisible for a while during the second half. She could've been given more footage.

Shabby look-alike of Obama. Could have done better.

Some of the scenes have background score so loud, it seems as if it's an attempted effort to drown SRK's encyclopedic rant.

You get a sense of deja-vu more than once in the film.

Almost unbelievable ending. Is it because in movies everything is possible?

The histrionics of both Kajol and SRK

Shahrukh has maintained his performance in a very consistent manner. King Khan, keeps his face very void and his smile is forced. Rizwan has autism and you can tell it because of the behavior Shahrukh has pulled off. Not very loud, cool, and the stuttering stubbornness makes Rizwan an absolute prototype.

Kajol is splendid as Mandira. She leaves you speechless and then with a choky throat. It was nice to see her in above-the-knee costumes this time. She looks in great shape and age only seems to make her more beautiful.

The array of assorted actors like Navneet Nisshan, Jimmy Shergill, Vinay Pathak and Soniya Jehan also add to the variety in the film.

Definitely a yes. This film is worth a watch. Karan Johar has made a film which reminds us that we are human beings first. Race, religion and other differences come later and should matter last. Most importantly, it reinstates faith in love and its power to heal.