'Both my dad and Lord Meghnad loved 'Rang Rasiya'. Lord Meghnad has become a big champion of our film. He praised my performance to the skies and noticed so many nuances,' Nandana told IANS.

Nandana's father flew down all the way from China where he was attending a conference to attend the premier of the movie.

'Baba just loved it. He said he was glad he made it to London in time for the screening. Frankly, I didn't have time for anyone else,' she said.

Based on legendary painter Raja Ravi Varma's life, the movie is a sensuous love story of the great painter and his muse, a woman called Suganabai. While Randeep Hooda plays Varma, Nandana will be seen as his muse.

The two-week long festival, which concluded last week, threw forward some huge surprises for the film.

' 'Rang Rasiya' was superbly received at the festival. The audience was enthralled by the colours and emotions of the theme. It was screened alongside Danny Boyle's 'Slumdog Millionaire'. Both the films were much talked-about. It was interesting because 'Rang Rasiya' was funded from India while 'Slumdog Millionaire' was funded from abroad,' said Randeep.

'That's because it was made simultaneously in three versions - Hindi, English and Hinglish (in Hindi and English). And all three versions couldn't be readied in time. We've screened the film at Cannes and Venice. But like I said, not in the competitive sections.'

After that Nandana and Randeep went to Sri Lanka for a fund-raising event for the forthcoming Sri Lanka Film Festival.

Barely a few words were exchanged between the pair throughout the evening.

When asked about cold vibes with Randeep, Nandana brushed it off saying: 'People are fighting all over the world. So I guess we're just being in character. But seriously, Sri Lanka is such a beautiful place. This was my first visit. I wish they'd stop all the separatist strife would end.' 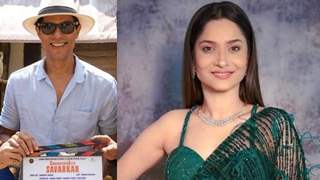