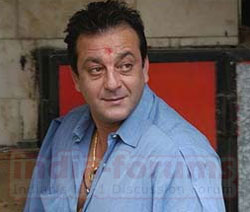 Sanjay Dutt is temporarily relieved. There is a possibility that he may be out on bail for another month, according to his lawyer.

The anti-terror court in Mumbai, that jailed the actor, has yet to send the copy of its judgement. Karan Singh, Dutt's lawyer, said, "He has still to receive the court order. We expect it by mid-October." The court order was supposed to reach Dutt on September 27, but now it is delayed.

And what is Munnabhai doing with his time? Completing all the movies riding on him, of course. There are six movies under production, at a cost of about 750 million rupees.