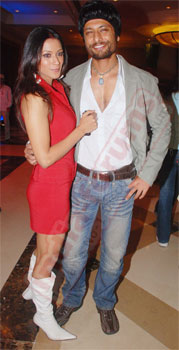 New Delhi, Oct 25 (IANS) 'Mumbai Salsa', a film about dysfunctional relationships among young Indians, has given a great platform to eight upcoming actors who now see themselves in new light.

'This film has changed my life, I have become health conscious but I am sorry to disappoint my female fans: I won't be seen in six-pack abs,' stand-up comedian Vir Das told IANS.

'After this film I have two more projects in hand which I can't name right now. Apart from that I will be doing a stand-up comedy show in Delhi based on the history of India which would be shown on TV by March 2008,' Vir added.

Actress Amruta Khanvilkar, who had participated in 'Zee Cine Star Ki Khoj' on TV, also stars in the film that was released Friday.

'Although I had been doing ad films, after this it seems as if all the doors have opened for me,' Amruta added.

She also had a good word for co-star Vir.

'Vir is an amazing person, he is charismatic and a prankster. While shooting for the film I had a crush on him and he is my reel life hero apart from Shah Rukh Khan.'

The title of the film, 'Mumbai Salsa', refers to a lounge bar in Mumbai. Apart from Vir and Amruta, Manjari Fadnis, Raymond Irani, Indraneil Sengupta, Dilip Thadeshwar, Neelam Chauhan and Linda Arsenio are also making their debut in the film.

Amruta agreed: 'Vikramji is a great person to work with; the way he explained what he expects out of all of us was very supportive and enthusiastic. It was a memorable experience working with him and I am hoping high for it.

After 'Life In A Metro', 'Saalam-e-Ishq' and 'Honeymoon Travels', 'Mumbai Salsa' too is a multi-starrer based on dysfunctional relationships among young Indians working in different corporate houses.

The film shows how the race of life changes people's perceptions and why they spend more time in pubs and nightclubs apart from their offices and homes. Mumbai Salsa is one such pub in Mumbai where the lives of these characters change for ever.

'The script is so strong that it will leave an impact on a youngster's heart, mind and soul,' Amruta said.

For the first time singer Alisha Chinai is doing an item number on the title track in the film.

'Many new things have happened in this film, it is a complete entertainer yet connected to many people's lives. I am sure people will love this film, although it is the same concept but shown differently,' said actress Manjari.

While Adnan Sami has scored the music for the film, Sameer has penned the lyrics. Kunal Ganjawala, Amit Kumar, Sami, Chinoi, Gayatri Ganjawala, Shreya Ghoshal and Shaan have sung songs in the movie.