'The spirit and essence of 'Mr. India' is just fantastic. I always wanted to make that type of film,' Kohli told IANS.

The film is about four children and their angel nanny, just like 'Mary Poppins'. But Kohli said: 'My film has not been copied from any movie. If I had to copy it, I would have very well taken the copyright for it.' 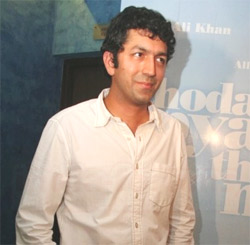 'Thoda Pyaar...' is not my version of the film, but it is as 'desi' (Indian) as 'Mr. India'. You can say that it falls under the same genre. I love the way that film is made and I am a great fan of Shekhar Kapur,' said Kohli who was in the capital to promote his film.

Kohli says he has seen 'Mr. India' almost 200 times. The 1987 blockbuster 'Mr. India' was a science fiction superhero film starring Anil Kapoor in the title role, Sridevi as his romantic interest and Amrish Puri as the villain Mogambo.

Kohli describes it as a feel good movie, saying: 'The film creates such a nice feeling. It teaches and entertains at the same time!'

Although the film has been given a U-certificate by the censor board, it shows Amisha romancing Saif in a bright yellow bikini in a swimming pool. In that too, Kohli finds a direct connect with 'Mr. India'.

'Even 'Mr. India' was a children's film but it had the song 'Kaante nahin kat te' picturised on Sridevi and Anil. That was also a sensuous song.

'Sensuality and vulgarity have a difference. I don't make films like that. Besides, 'Lazy lamhe' is a clean song. It wasn't censored and we also got a U-certificate. You can very well watch it with your parents, brothers and sisters and believe me you won't be embarrassed,' he maintained.

The film, made within a budget of Rs.200 million, also has four young children in pivotal roles and Kohli has handpicked three of them from Delhi.

'I wanted kids with a Delhi accent, with clean Hindi. Mumbai kids don't have that fluency in the language. I tested about 300 kids from Delhi and found three gems,' he said.

Most of Kohli's films, including 'Mujhse Dosti Karoge', 'Hum Tum' and now 'Thoda Pyaar Thoda Magic', have been the bright and lived-happily-ever-after' types. So would he ever be game for a dark film?

'I don't know. I haven't ever thought about it. I just like my films to be emotionally high,' he said.