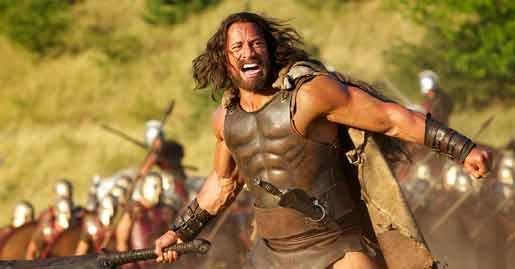 This is the second film this year based on Hercules, the son of Zeus. The first being the Kellan Lutz-starrer "The Legend of Hercules", which released in mid-January.

But unlike the previous film, director Brett Ratner's "Hercules" is a revisionist take on the classic myth, based on Radical Comics' "Hercules: The Thracian Wars" by Steve Moore.

The film begins with questioning the audience, "Do you know anything about the son of Zeus?" and it further goes on to explain the myth of the demi-god Hercules and how he overcame the 12 dangerous missions before being accepted as a legend. All this is narrated through a montage that forms a sort of a prologue to the tale.

Then the narration shifts to the Macedonian Coast of Thrace, where we actually encounter Hercules who isn't the son of Zeus but a mercenary orphan albeit a selfless one, who over the years has engineered his reputation as a demi-god, allowing him to make good of the image he has created of himself. He is there to drive away the pirates who have infested the coast.

Along with him are a loyal band of warriors, and one storyteller. They are; the mystic fortune teller Amphiaraus (Ian McShane), his oldest friend and fellow orphan Autolycus (Rufus Sewell), warrior Tydeus (Aksel Hennie) who suffers from a post traumatic stress disorder, an ace archer Atalanta (Ingrid Bolso Berdal) and his nephew, the storyteller Iolaus (Reece Ritchie).

Soon, Hercules and his group are coaxed by Ergenia (Rebecca Ferguson), the daughter of Lord Cotys (John Hurt) to fight in a civil war to combat a rebel army, led by Rheseus (Tobias Santelmann) who has nearly destroyed the land of Thrace.

In effect, Hercules becomes the general in charge of the army defending Thrace. After training farmers to become soldiers, he leads them on into a bloody battle. Soon he is victorious and is rewarded with a lot of gold.

But instead of rejoicing the victory, he realizes that he may have been fighting on the wrong side in this fight. Hercules is now faced with a moral dilemma. Should they take the gold and walk-away or stay and fight for justice, forms the crux of the climax.

Midway through the film, you realize that the premise of the story has a strong resemblance to the iconic Akira Kurosawa's "The Seven Samurai".

The performances are good and credible. With most characters having a back story, it is fun to watch them blurt out dumb remarks throughout the action scenes. Also there is an overload of messages; about the need to believe in yourself in order to accomplish great things.

There is also a substantial emphasis on; the eternal debate over destiny versus self-determination and the belief that people need a hero, someone to look up to.

Dwayne Johnson in the lead exudes great screen presence as Hercules, but unfortunately in the emotional scenes he comes across as stiff. Isaac Andrews as Arius, Ergenia's son and Rebecca Ferguson fare well in the emotional melodrama, whereas Ian McShane offers comic relief.

What keeps you hooked is the rich earthy textures of the frames, the impressive production values and excellent 3D effects.

In spite of its flaws, it is a treat to watch "Hercules"