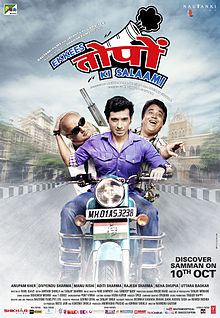 Ekkees Toppon Ki Salaami, the highest ode of respect given to an individual who has served the country selflessly. But should this ode be restricted to people from the defence forces or people with a political background? What about those zillion government servants who serve us day in and day out? What is the ode of respect that they receive? Ravindra Gautam's Ekkees Toppon Ki Salaami deals with these questions. A satire in itself the film gives out a message loud and clear that when pushed against the wall even the common man will go against the system that he slogged for all his life.

Ekkees Toppon Ki Salaami  is a story about two sons set out to get their father what he dreamt of all through his life -the ultimate sign of respect. High on thrill and laughter, this film takes the audience through the unbelievable attempt of Shekhar and Subhash Joshi to provide their father an Ekkees Toppon Ki Salaami (21 gun salute). Purushotam Joshi is a common man who fails to earn his bit of appreciation despite being completely honest during his life-long service as a government employee. Joshi's sons are however willing to go the extra mile to get their father his only wish. But will they succeed in their endeavour, forms the conflict of the story.

An ace actor like Anupam Kher, who is often criticized for his choice of films, gives a subtle performance in this one. He essays the character of Purushotam Joshi, an employee of the BMC. He is man who has lived his life on his dogmas and eventually dies with them. When his honesty is questioned the way he emotes the unrest, and sheer shock is very heart wrenching. Though he shares screen time only in the 1st half of the film, he does make his presence felt throughout the movie. The role of a dead body can also be enacted with such brilliance. Anupam Kher is the most gripping factor of the film. 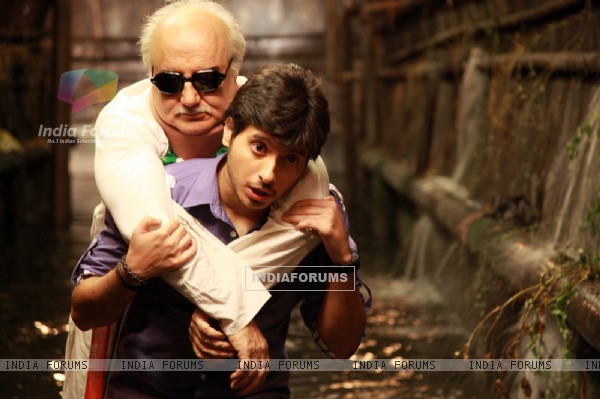 Divyendu Sharma and Manu Rishi Chadha play Anupam Kher's sons in the movie. They are shown to be people who don't value, neither believes in their father's ideologies. Divyendu is convincing actor and thus doesn't go wrong in the genre. He puts together a decent show. To certain extend he carries the entire movie on his shoulders and does a good job in it too. He has emoted two extreme emotions in the film, one that of disbelief and the other that of faith. Though contracting emotions he does it with much ease. Manu Rishi Chadda is also good in the movie but looks to be side lined eventually.

Aditi Sharma who plays Tanya in the film is Subhash's love interest does a satisfactory job. Neha Dhupia doesn't have much to do in the film. She plays a long lost actress who wants to get back into lime light. But eventually gives an under the belt performance.

Songs are forced and the first half is a lot more stretched due to the same. The 2nd half is what does the trick with some comic element and serious message sent out in it.

All in all Nautanki Films' Ekkees Toppon Ki Salaami puts together a decent show. It isn't splendid cinema but the effort is worth applause. It isn't a mass entertainer but a very thought provoking film. It makes the viewer aware that it's not the money one makes but the respect he has earned from the cradle to the grave that eventually matters.