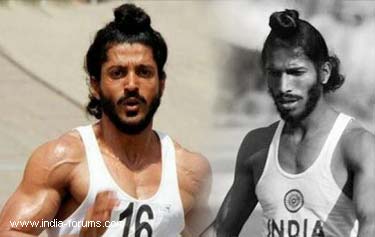 Essaying the role of an athlete is not easy. After undertaking a rigorous regime to get into the character of Milkha Singh, Farhan Akhtar will now have to work hard to look like the 17-year-old sprinter in the film "Bhaag Milkha Bhaag".

This is the time, during the 1950s, when Milkha Singh was a 17-year-old army recruit.

Said a source close to the project: "Farhan worked really hard to look at least 10 years less than his actual age to look like Milkha in the 1960s. Farhan would now have to knock off another 10 years from his real age to look like the 17-year-old Milkha, the army-boy in the 1950s."

Farhan, who spent a lot of time researching the army for his war film "Lakshya", would undertake at least a fortnight of on-the-spot training in an army cantonment to get the hang of that particular phase of Milkha's career.

Taking a breather from shooting in the Jawaharlal Nehru Stadium in New Delhi, director Rakeysh Omprakash Mehra said: "We're not looking anywhere except at getting the on- screen Milkha as correctly on screen as possible. It's not about just looking like Milkha Singh or running like him.

When persuaded to reveal more on how Farhan intends to look 17 years old as an army recruit, Mehra said: "We've shot the runner's phase. We will be going back further into Milkha's life. I'm sure Farhan would be able to pull it off with full conviction. We don't know how much of Milkha Singh's life we'd finally be able to get on screen. We are doing our job to the best of our abilities."

Incidentally, the success of another biopic, Tigmanshu Dhulia's "Paan Singh Tomar" on a sprinter's life, has put additional pressure on the Milkha project.

"Bhaag Milkha Bhaag" producers Viacom 18 are keen to ensure that there are no resemblances between the two films.

Said Mehra nonchalantly: "We aren't looking at anything except Milkha's life and how to put it on screen. We've the real Milkha Singh with us. He is currently out of the country. But the minute he returns, he'll be joining us."