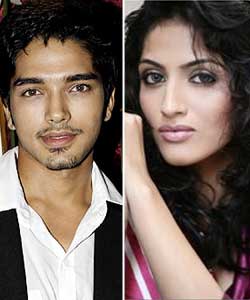 As reported, Jhalak Dikhhla Jaa 4 - Dancing with the Stars ace-choreographer, Nishant was also set to make his acting debut with the show. Today, we bring to you some more names that are expected to be part of the venture.

A source informs, "Monica Khanna, better known for roles such as Swati of Zee TV's Afsar Bitiya and Roshni of Sony TV's Mahi Way, is expected to be a part of the new show as a dancer. Harsh Rajput, last seen in Dharam Veer, will also essay a pivotal role."

"As the show is about dance, these two, along with Nishant would be a few people who would be participating in the dance competition", adds the source.

Both Monica and Harsh remained unavailable for comment but an anonymous source from the production house confirmed the buzz.

With this, get ready to shake a leg soon…

9 years ago when this show gonna come on air...
dying to see apu back on tv.
may b fter sach ka samna goes off air asmaan ke age will launch
what will b apu's name ..what will b his character ...thats all I can think off right now :P

9 years ago Thanks for the news on Aasmaan Se Aagey, The show concept seems interesting, please tell us when it will air and what is the character of Apurva who plays the lead with Ojaswi

+ 2
9 years ago Thanks for the article

+ 3
9 years ago I want old star one back! If harsh Rajput is there than its alright

9 years ago Thanks for more info on Apu's next show .firstly is the name Asmaan ke or Se Aage. Second is Apu going to shake his leg too on this show or rather still dont know anything about his character.when is this show going to air and what time slot too.many ques

+ 5
9 years ago welcome back harsh
waiting for the show :)

+ 3
9 years ago Thanks for more information on this show, I am still inquisitive to know Apurva's Role in the show, TB please give more information about his character much appreciated !!
When will the show be aired?? I hope sometime in Jan.. we need to watch the promos first !!