View Profile
Well, well, well, for all you ardent followers of Miss Universe 2010, Ximena Navarrete Rosete, it's time to rejoice! Not very long ago, we had heard her shower compliments upon our tinsel town biggies, while openly expressing her desire to work in Bollywood flicks. 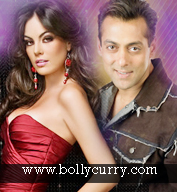 Inside sources claim, Ximena has a green signal to work alongside director, David Dhawan and the macho Salman Khan in the long speculated sequel to the comedy, Partner. It appears the filmmakers are willing to take their chances with the lady, who is not only a fresher, but also one of non Indian origin. Given her Mexican nationality, Hindi speaking was eventually bound to pose an issue; resolving which Rosete has already begun her lessons.


Her wardrobe for the movie has inspired more gossip, with rumors of the filmmakers having roped in New York based fashion designer Sanjana Jon. Currently, the Mexican beauty is in India for a duration of 10 days, promoting the designer's 'Celebrate the Girl Child' campaign

Will anything concrete surface from all this buzz? Your guess is as good as ours! For starters, we can tell you the model is self proclaimed 'huge Salman Khan fan'. Not the first, yeh?!

Watch this space for more!