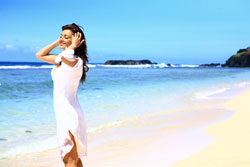 Everyone knows that Minissha has quite an adventurous streak in her and is quite a water baby. The schedule of Kidnap in Mauritius involved scenes where she was required to take a dip in the sea. During one such shot, so engrossed was Minissha in her mid-sea swim that she did not realise that the currents had pushed her far from where she was supposed to be.

The film's cameraman was the first to realise that she was nowhere in the frame! 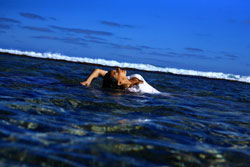 The crew panicked as the underwater currents had pushed her about 2 kilometres away from the coastline while Minissha was blissfully unaware of the situation. It took the crew ten minutes to finally spot the petite actress, much to everyone's relief. A speedboat was sent to retrieve her immediately!

Director Sanjay Gadhvi confirmed the news. "It was scary to say the least but all's well that ends well!" he remarked.