Mumbai, Dec 12 (IANS) Actress Ratna Pathak Shah, who is planning to do some plays with husband Naseeruddin Shah, believes just having a happy family can be a blessing for any professional.

'Naseer and I are looking at a couple of plays. We want to revive a Bernard Shaw play called 'Village Wooing' that we had done 20 years ago. It's such a sweet play. I'm involved with an NGO, which works for educating children. As for acting, I'm open to any medium where I get a good role,' Ratna told IANS in an interview.

When told that she had frittered away her chances as an actor to look after Naseer, Ratna said: 'I never had to look after Naseer. He has a manager to do that. But, yes, I do feel people don't look beyond him at me. On the other hand, if I hadn't lived with and observed Naseer so closely I wouldn't have been the actress that I am.'

Asked if she has brought stability to Naseer's life, she said: 'He's a pretty stable kind of guy. Maybe I've brought some order into his life - both practical and intellectual organisation. Just having a happy family can be such a blessing for any professional.'

Her last screen role was as Paresh Rawal's ex-girlfriend in her husband's directorial debut 'Yun Hota To Kya Hota'.

Ratna said: 'Before that I worked in a film called 'Encounter'. I seem to get roles only when Naseer is in the film. In 'Yun Hota...', I played a junior artist with a daughter whom she sends to America. It was an interesting part with just a handful of scenes for me, but all very well written.

'But the real fun part of doing this part was Paresh. He's such an extremely generous actor. How many films have romantic scenes between a 40-plus couple? I'd love to have more such opportunities.'

She added: 'If we've to mature as a cinema-making nation we need to keep our eyes open. Look at the weird wacko people we get to meet on a daily basis. Where are they on screen? In our films and on television we're stuck with these ancient cardboard characters who have no bearing on real life. I'm affronted by the way my intelligence is challenged in our films and on television.'

Ratna feels concerned about the poor-quality work that Naseer often has to do on screen.

'There're things one has to do to keep the home fires burning or just remain part of the business. Everyone does them. Now when he has nothing to lose he can afford to make statements about staying away from acting. But I think he's too much of an actor to give up acting.

'However, he's definitely bored with acting. For the last 30 years he has been constantly reciting his lines. For the last one year I haven't seen him do that. I'm waiting for that to begin again. But his interests are certainly widening and deepening. I think he has a contribution to make as a director,' she said.

Ratna herself isn't tempted to direct a film. 'Not now; probably never. Filmmaking isn't just about writing a script and getting five people together. It requires ability and a skill that everyone can't acquire.

'It took Naseer 30 years to get there. Nowadays everyone with a camera seems to be making a film. But that isn't the way to go about it. Filmmaking is a medium of brevity. If you don't know how to go about it, then don't bother,' she said.

She's happy with her career on television where her comic turn on 'Sarabhai Vs Sarabhai' has won her a new fan following.

Ratna said: 'I never trained to be a comic actress. But once I started doing comedy I found that I enjoyed it. Comedy helps me to lighten up and not take myself too seriously. It's a skill that requires to be honed. I've done a handful of serials in the last five years. 'Sarabhai Vs Sarabhai' is the best.' 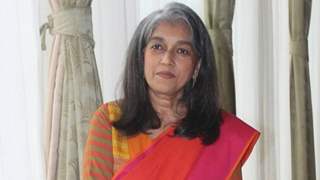 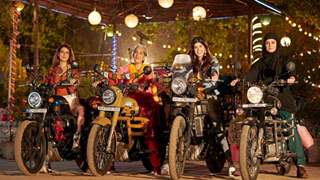