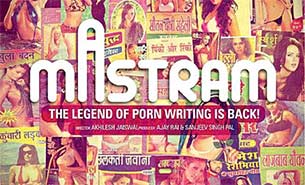 Released May 9, the movie had a weekend collection of Rs.3.45 crore, said a source.

The "Mastram" trailer, which released Feb 14, had garnered over 16 lakh hits on the video sharing website YouTube in two months itself.

Directed by debutant Akhilesh Jaiswal, popular as the screenwriter for Anurag Kashyap's 2012 release "Gangs of Wasseypur", the movie is a production by Bohra Bros.