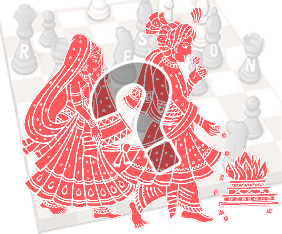 Featured Video
A bond for seven births, an oath to protect, love and trust your partner and a promise to stay together. This bond when solemnized is called Marriage—the most sacred and pure relationship between two souls.

But this bond of seven births nowadays does not even last for 7 months. The Tellywood Industry seems to be badly smitten by the multiple marriage trend in the modern society. To bring a new twist in the serial or a falling TRP rates often induces the creative directors to come up with extra marital affairs of the characters or the past relationship surfacing in the present. Whether it is for revenge, love, arranged or just to experiment, Gautam of Kyunki Saas Bhi Kabhi Bahu Thi, got married 3 times. First it was to Ganga, then to his love Teesha and finally, for revenge, to Damini. Three different marriages for three different reasons. Can it get any better than that?

Kashish of Kahiin To Hoga got married 4 times, first to Piyush, then to Sujal, and then to an old man and then finally back to Sujal. Anurag Basu of Kasuati Zindigi is another such example where marriage is made a mockery of.

Over the years of Tellywood Cinema, there have been multiple marriages. Our team did a research and came up with the top 5 marriages of Tellywood.

It is generally seen that the people try to ape what their favorite actors and actress are doing onscreen. The multiple marriages of their role models might leave an impression in their mind by making them not to believe in the sanctity of marriage. As a responsible media, the directors and producers should be more careful in what they are airing everyday to its audience. The way the current television trend is going on, Marriage seems to be a game played similarly to Monopoly! How would one predict where one would land.. is all a matter of chance!!

+ 3
15 years ago yah just married 3 times 1 with piyush teh other 2's with sujal but yah she got enaggged so many times but not married:@

15 years ago hahahah too good yaar...but i think kashish even got engaged many times lolzz...

Regard
Rajeev and Aamna jodi's biggest admirer and supporter forever and ever Zee....