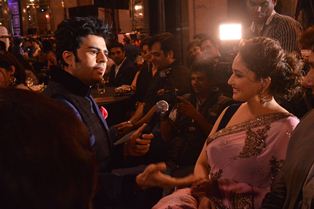 Once again he was seen anchoring the Film fare awards last night which saw everyone from who's who of Bollywood.

We hear that the actor really had the audience entertained and in laughs all along. From having Karan Johar sign a nahane wala lauta to flirting with Madhuri Dixit Nene in front of Mr. Nene, Manish was seen not only enjoying himself but also making sure that our industry too has a good time.

7 years ago Good comic timing. Very few people have it.
He does and does a good job of making a joke of people (including himself) without offending anyone. Loved him on JDJ also

+ 2
7 years ago Manish has a great sense of humor.
It was Filmfare Pre-award party, not the Filmfare Awards.

you look a very nice n down to earth person

7 years ago He is such a natural! And a brilliant host. Love him :D

+ 3
7 years ago I loved him in Jhalak and TGT.. Kirrruuu and that sari holding act for Madhuri

7 years ago Hahaha Manish is hilarious and I love his hosting! And ofc my favorite the dancing Queen/Diva Madhuri Dixit!!!