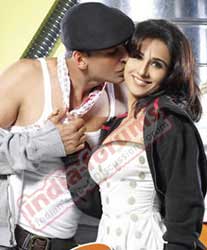 Mumbai, Nov 1 (IANS) Vidya Balan has confirmed that Bollywood's ace designer Manish Malhotra apologised for her mal-dressed look in Sajid Khan's 'Heyy Babyy'. She blames lack of direct communication between them for the sartorial blues.

'Yes, Manish did send me an apology and that was very sweet of him. He sent a sweet message saying, 'I'm sorry I messed up'. I don't think my malfunctioning wardrobe in 'Heyy Babyy' was his fault entirely.

'I completely trusted Manish. But Manish and I couldn't share a direct connect to discuss my clothes. He couldn't be physically present at the shooting. And considering I was undergoing a makeover, it was very important for him to be there. We should've both worked very closely on my clothes,' she said.

Vidya holds no grudges against Manish.

'I hope we get another opportunity. He needn't have apologised. He got a lot of flak for my look. So did I. I accept the criticism as much as I accept all the praise that comes my way. When I look at 'Heyy Babyy', I say, 'God, what was I thinking?'

Vidya now accepts that glamour for her has to be defined in a more subtle way than it was defined by Manish for Urmila Matondkar or Kareena Kapoor.

'And we'll prove it. I've to do one more film with Manish very soon. We need to prove that we can work out a sensible sartorial equation.'

The 'Parineeta' girl is sure she can break free of the sari mould to look western.

'All we need to do is work harder. It was a personality departure and I wasn't paying attention. What was I doing? I had a mirror handy, no? I just thought surrendering to someone like Manish Malhotra is enough. It doesn't work that way. I messed up in 'Heyy Babyy', though hopefully, not in any permanent way. I'll get a second chance. I've realised how important clothes are to playing characters,' she said. 'It was my gut feeling that Sheena could do it. She has an aesthetic sensibility and being a writer she understands what her character should wear. In 'Bhool Bhulaiyaa' director Priyadarshan was very clear as to how I should dress. He wanted plain unobtrusive tussar saris with contrasting blouses,' the actress said.

'I'm very happy with my look in 'Bhool Bhulaiyaa'. I feel very flattered when people say it harks back to the Shabana (Azmi)- Smita (Patil) days. Sheena was there throughout 'Bhool Bhulaiyaa'. I'd like my costume designer to be with me all through a film and not send instructions through assistants,' she added.