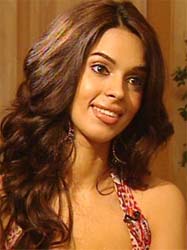 Donning a pretty-in-pink dress by Max Azria (BCBG), Mallika Sherawat made her triumphant return to Los Angeles on Tuesday night in charitable fashion along with Oscar winner Marisa Tomei, Brad Pitt and Angelina Jolie to support American Pulitzer Prize winning NY Times journalist Nicholas Kristof's charity CARE at LA's Pacific Design Center.
Mallika said, "Nicholas Kristof is a world treasure. The work he's done around the globe in support of women's rights and those-in-need is an incredible inspiration to me."
Mr. Kristof and Mallika were overheard discussing working together for one of his charitable associations in India, as well as the feature film production based on his new book, "Half the Sky". Mallika was also seen bonding with Oscar-winning American actress Marisa Tomei, who, upon hearing of Mallika's extended stay in Los Angeles, told the Indian star, "You're going to do very well here."
Featured Video