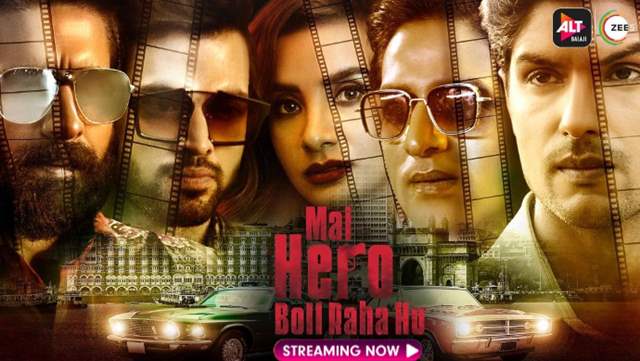 Mai Hero Boll Raha Hun is the story of one man, a Hero named Nawab, set in the city of dreams, Mumbai, which will take the audience through a rollercoaster storyline showcasing the rise of a 'Hero'. The series takes the viewers through the turmoil and the journey of not only the Hero who rises from being an underdog to a DON but also the pace of Mumbai at a time when the crime was paid to proliferate and Mumbai was Bombay.

The series showcases the journey of Parth Samthaan, who plays the role of Nawab, an underdog from Bareilly who rose to rule the entire city of dreams. Nawab turns into the most-wanted gangsters but still has strings attached to his girlfriend Laila (Played by Patralekha), a popular 90s Bollywood heroine. Nawab's deep attraction for Laila makes him land in a bizarre state, where he turns the world upside down to keep her safe. Their romantic tale is disrupted by the main antagonist Lala (played by Arslan Goni), who wants to snatch away the entire underworld from Nawab's feet.

Opposite Parth, we have Sachin Kadam played by Ankit Gupta, a cop who is out and about to ensure that crime and criminals are out of Mumbai. We see him pull off a dialogue where he says how he will turn the crime branch into an encounter branch. Amid all of this, Inspector Rajan played by Ganesh Yadav makes things easy for Nawab in helping him get where he wishes to. He also has his friend Mumtaz, played by Meenal Sahu, and helps him through with the support he needs to rise to the top. On the other hand, there is Hussain Bhai, played by Krishna Kotian, who is Nawab's way up through the gang. While he has his love Manasvi, played by Arshin Mehta, there's also Nawab's game to work his way up as he tries to play on two sides. While Mastan Bhai (Chandan Roy) and Dadabhai (Danish Hussain) are two of the biggest dons, Mastan and Lala betrayed Dadabhai, giving Nawab the perfect out for himself. And amid all of this, Nawab's lady love Laila, he is at loggerheads with Lala, trying to make his way up and yet, fighting his way through.

Parth has definitely managed to break the stereotypes around his character and shines through the show constnatly. While it is sometimes difficult to see him at the face value, he does convince you with his brilliance and effortless portrayal of Nawab. For this one, we have to give it to Arsalan for doing what he does, because oh boy, did I constantly despise him to the point that I began to hate him. Both the actors do have their lows, but those are easily overlooked.

Meenal, Arshin, and Patralekhaa manage to play their parts absolutely well. It is interesting how the three ladies all have absolutely diverse roles and they do complete justice to the roles. Ankit is another great addition to the cast and we are all rooting for him somewhere or the other. As for the supporting cast, Indraneel Bhattacharya, Chandan Roy Sanyal, Danish, Krishna, and others, all add to the story just fine. Errol Marks aka Jaggan and Anubhav Nanda aka Yakub also help lift the story with their roles as men on the side of Nawab.

Well, apart from amazing performances and a story that seems to have wrapped around just right, we also love the look and feel. Though there is a modern-day touch to the 90s vibe that has been created with Main Hero Boll Raha Hu, we love how it looks. The background score adds to the look and feel and helps the story play out better. Director Siddhartha Luther also wins us over with how he wants to narrate the story.

Well, since there are parallel tracks running, one might feel a little lost from time to time. Blame it on the editing or the cinematography, even though we know that these are two different stories, one might feel a little all over the place every now and then. In an attempt to give the film a non-linear pattern, there's too much haywiredness that comes through.

Well, if you are looking for a light watch and yet like action and drama, this could be a good binge-watch pick. The look and feel of the show manage to draw you towards it and of course, there is a great story that comes about just fine.