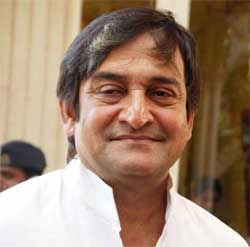 Currently shooting in Paris, the CID team headed by ACP Pradhyuman (Shivaji Satam) has its task cut out as it faces a one of a kind challenge chasing an international don.

As per the present storyline, the CID team is under severe threat after the kidnap of Dr. Sonali (Manini Mihir Mishra), Dr. Tarika and officer Kajal (Jassveer Kaur). To make matter worse, the team has got the charred body of their officer Freddy.

Tellybuzz reported earlier that the CID team will soon fly to Paris to unmask the bad guy. Sony and Fireworks Production's were on the lookout for a big name from Bollywood to play the pivotal role of the bad man.  Our source tells us, "Mahesh Manjrekar, Jackie Shroff, Kabir Bedi and many others were approached. Mahesh who has had a past association with the channel in Jhalak Dikhhla Jaa was the first choice. Though the actor had some date problems, he has apparently given his nod to be part of the show".

We tried calling Mahesh and even sent him a text message, but we did not get any response.  When Telly Buzz reached out to Danish Khan, Marketing Head, Sony, he informed  us that "We will be able to confirm on the name latter today".

The CID team must be excited to welcome Mahesh on its sets in Paris.  Here's wishing all the best to the CID team for its upcoming episode with this international don!

iMini 7 years ago very interesting
thanks for the article buddy

SourCandyDrop 9 years ago I loved to hate this guy in the movie Wanted. He's a great actor :)

monika21 9 years ago good to see him in cid. waiting for the episode now

But I want Shweta back!!!

Ms.S.K. 9 years ago Current track is continuous for few weeks without showing the face of the kidnapper/don which we were looking forward to the end to see who it could be BUT now spoilt it knowing it is Mahesh Manjrekar.

OddiYulle 9 years ago Yay! This is gonnabe amazing , but nothing beats Castle

nidha1983 9 years ago amazing
its going to be interesting

yipee 9 years ago wow thats great...shud be interesting...charred body of freddy? i hope he isnt shown dead...he is a nice funny character

chahat4u 9 years ago it would be interesting.Though these past few episodes were a bit too loud/violent.