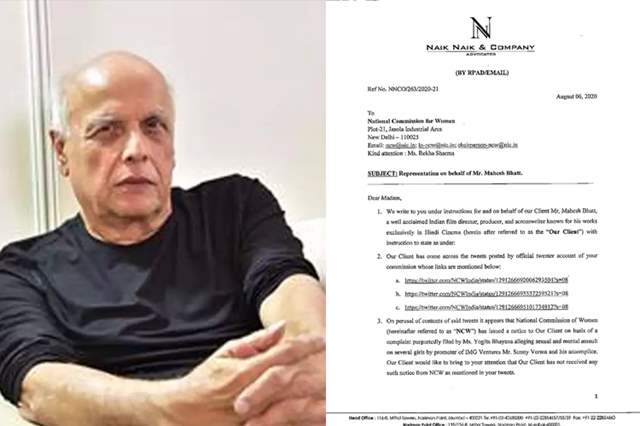 While the saga surrounding actor Sushant Singh Rajput's passing away continues to ger murkier with every passing day, the people and names involved in it have either been upfront about their take or in other cases, just keep quiet. While not involved in Rajput's saga, filmmaker Mahesh Bhatt found himself being one of the centers of talking points in the nepotism debate.

Now, the National Commission For Women had sent a legal notice to the filmmaker and other names including Mouni Roy, Urvashi Rautela, Esha Gupta, Rannvijay Singha, and Prince Narula for allegedly promoting a firm accused of exploiting girls.

In the same, these celebs were asked to record their statement in connection for promoting the company who has been accused of blackmailing and sexually assaulting women who aspire to make a career in the industry. One of the first ones to respond to this notice has been Bhatt.  The filmmaker’s team released a statement on his behalf, “Mr. Bhatt would like to bring to everyone's attention that he has not received any such notice/summons or any form of communication from NCW as mentioned in their tweets. On behalf of Mr. Mahesh Bhatt and his legal team please find below the letter sent to NCW for your reference. Mahesh Bhatt would like to place on record that neither he is associated with IMG Venture or his promoter nor with any incident mentioned in their tweets in any manner whatsoever,” read the statement.

The NCW’s official social media account Tweeted, “@NCWIndia has issued a notice to @MaheshNBhatt @UrvashiRautela @eshagupta2811 @rannvijaysingha @Roymouni @princenarula88 for the recording of witness statements on a complaint received from Ms @yogitabhayana, Founder @pariforindia, alleging sexual and mental assault on several,” “girls by Promoter of IMG Ventures, Mr Sunny Verma and his accomplice. Despite directing to appear before the Commission and intimating the same through all possible modes of communication, these people have neither bothered to respond nor attended the scheduled meeting,” read another Tweet.

The last tweet read, “NCW has taken serious note of their non-appearance. The meeting has been adjourned to the next date, ie, on August 18 at 11.30 AM. You will be sent formal notices again and non-appearance will be followed by action as per our procedures.”

Yami Gautam and Vikrant Massey collaborate for Mohsin ...
-2 seconds ago

review
Review The Confession Review: The film Relieves all the Serial ...
20 minutes ago